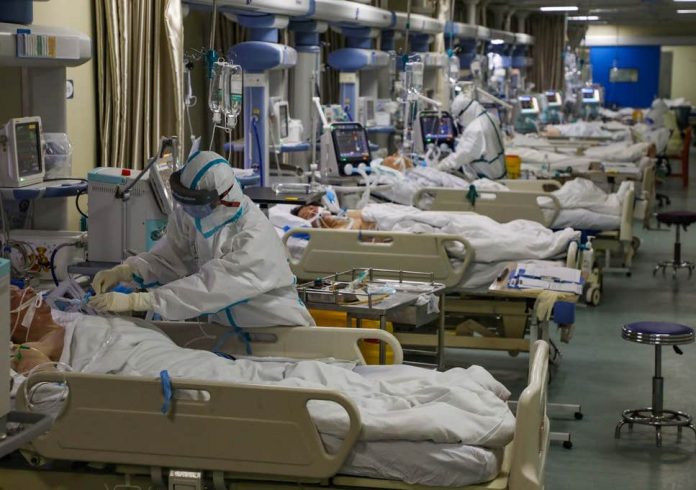 This is one of the most profound statements about the human race you will ever come across: “We were all humans until race disconnected us, religion separated us, politics divided us and wealth classified us.” I don’t know the author (I’ve seen it attributed to Susan Boerner, the American artist) but I know one thing: as the entire world comes under attack from COVID-19, humanity is collectively in severe distress and disarray — irrespective of race, religion, class and ideology. We are all in panic mode. We are desperately looking for a solution and we don’t care the race or religion of who finds it. We do not have enough time to be analysing our artificial divides.

Have we ever seen any threat of this magnitude to the human race? Well, in fatality figures, COVID-19 is a non-starter. With 61,000 recorded deaths since December 2019, COVID-19 does not come anywhere near the worst plagues — yet. The Black Death also called the Great Bubonic Plague, claimed no fewer than 75 million lives — possibly up to 200 million — from 1331 to 1353, a period of 22 years. The Spanish flu infected 500 million (about 25% of the world population then) and killed at least 17 million from 1918 to 1920. The bubonic pandemic, which started in China in 1855, killed 12 million — with India alone accounting for 10 million deaths. COVID-19 fatality figures are far behind.

In our judgment as human beings, our biggest threats are the terrorists who have held the world by the throat for decades, threatening to bomb us out of existence. In our estimation, our worst enemy is the climate change that could see the world disappear under pressure from ultraviolet rays and seas of flood from the melting Polar ice. In our wisdom, our mortal enemy is the arsenal of nuclear weapons that the superpowers have accumulated, enough to destroy our planet 10 times over — with plenty to spare. But here we are being chased by a virus that is not visible to the eye. God has indeed confounded the wisdom of the wise and frustrated the intelligence of the intelligent.

No, I am not saying God sent COVID-19 to punish or destroy the human race as some people have sensationally claimed. I am not theologically deep enough to confirm or disprove such claims. And I am not interested in eschatology — the study of the “end of the world”. That is not my problem. But I just keep wondering: with all the scientists in town, with all the health experts around, and with all the intelligence agencies in the world, how on earth did a virus travel unnoticed and unchallenged from Wuhan, China, to all the corners of the earth, killing thousands in advanced societies such as the US, Italy and Spain? In the end, the best of human beings remain imperfect.

Will the world remain the same again after recovering from this devastating pandemic? Again, we do not know yet. But, for now, we know economies are in ruins, jobs are disappearing, poverty is on the rise, and mental illnesses are piling up — across the world. We know that airlines are in jangling turbulence, banks are battling with loan defaults, commodity prices are hitting the floor, factories are shutting down, exports of vital medications — such as paracetamol and insulin — are seriously hampered, and education at all levels is in the doldrums. I have no capacity to understand the implications of all these for the human race, but I can bet they will not be pretty.

Typically, when epidemics and natural disasters happen to the human race, they are limited to certain countries and regions. The tsunamis, the cyclones, the hurricanes, the earthquakes and the epidemics happen at different times to different nations. We often think earthquakes and hurricanes are punishments from “God” for the sins of the Western world. We even gloat. Ebola, Yellow Fever, Malaria and Lassa are seen as Africa’s problems. We are often reminded of Africa’s poor and inadequate health systems and how far we are from civilisation anytime we experience these outbreaks. COVID-19 seems to have united everybody. Nobody can gloat or snigger.

In fact, the more advanced countries are bearing the pains more — so far. You see, no health system in the world was designed to handle this mini Armageddon. How many ventilators are there in the whole world? How many hospital beds does the whole world have? How many coronavirus test kits are there on a planet inhabited by seven billion souls? Even if we have all the ventilators, all the test kits, and all the hospital beds, do we have all the doctors and all the nurses to care for the infected? The brutal fact is that the world never thought it would ever experience a challenge of this magnitude and could never have been able to handle the monstrosity. Humans are limited.

While the human race is running helter-skelter over COVID-19, there are so many things we don’t know yet. We do not know when it will peak. We do not know when it will end. For the infections to stop, we will either develop immunity to the virus after it has killed a significant number or we produce a vaccine. At best, we will find a cure. After all, we are containing other viruses such as HIV and hepatitis. However, when will the virus be incapacitated? In six weeks? In six months? In six years? We do not know. We can only hope — and even pray — that a solution is found soon before the human race is decimated again. We are not sure of when. We are humans. We are limited.

What will be the consequences of the virus on the human body in the long run? We still do not know. Will those who have been infected and cured remain cured forever? We don’t know. In two years, or maybe five years, studies will provide more answers. Even though an overwhelming majority of the fatalities are the elderly and the sick, we still do not know why younger people are not being affected so much. And do we know whether their own infections are only building up to result in some other ailments in the future? We do not know. We have no way of knowing — for now. We are limited. Let us just treat what we know and worry about other things later.

Still, we take solace in the fact that the other coronaviruses that ravaged the world in the past came to an end in due season. The Severe Acute Respiratory Syndrome (SARS) appeared in November 2002 in the Guangdong province of southern China. There were 8,098 cases and 774 deaths in 29 countries and territories but it disappeared in July 2003. The Middle East Respiratory Syndrome (MERS) showed up in Saudi Arabia in June 2012 and by 2019, it had killed 912 of the 2,494 known cases. The soothing conclusion we can come to is: “This too shall pass.” It is not as if we have plenty of options apart from hope — as scientists struggle to put COVID-19 in check.

I dare say the causality aside, this situation is worse than the World Wars. There were known and seen enemies. The antagonists and protagonists could sit down and discuss. They had names and faces. There were meetings and conferences and treaties signed. In the worst-case scenario, one side surrendered and we moved on. You can negotiate an end to war; Germany signed the armistice in 1918 and World War 1 ended. You can force an end to a war, as the US did by dropping atomic bombs on Hiroshima and Nagasaki in 1945 during World War 2. How are we going to kill COVID-19 before it kills us? There is nobody to negotiate with and there are no peace treaties to sign.

My hope is that because the world is more advanced today than it was when the bubonic plagues ravaged the world, we will be more effective in slowing the spread of the novel coronavirus and eventually containing it before it gets to a stage that it can wipe out most of the world’s population. The whole world is eagerly waiting for the manifestation of the ultimate solution to the virus that has put the human race under siege. We are seeing the futility of bigotry, racism and chauvinism as we search for solutions. As the philosopher said, we were all humans until race disconnected us, religion separated us, politics divided us and wealth classified us. But will COVID-19 re-humanise us?

AND FOUR OTHER THINGS…

We have our different definitions of leadership, but there is one I love with all my soul: “Leadership is rising to the occasion when the occasion arises.” Governor Jide Sanwo-Olu of Lagos state has been under severe scrutiny since he came into office in May 2019, with many people declaring him “missing”. But you will agree with me that he has really been at the forefront of the war against COVID-19 and has been rallying his “troops” commendably. He definitely has not dropped the ball. Prof Akin Abayomi, the commissioner for health, has also been terrific. He’s a gem. Most importantly, I appreciate the frontline health professionals risking their lives day and night. Kudos!

Two weeks before President Muhammadu Buhari put Lagos, FCT and Ogun under lockdown as part of measures to tackle the spread of COVID-19, I had been practising it — sort of. But it is easy for me: I can afford to stock my food store, I have a spacious accommodation and I have virtually uninterrupted power supply, supplemented with inverter and generator. But I feel privileged. Most Nigerians live from hand to mouth. They are badly affected. It is a good thing that palliatives are being shared out, and this must be done conscientiously. In the end, we have to choose between sacrificing our freedoms to stay alive and getting swarmed by the coronavirus. Realities.

How many COVID-19 cases do we have in the world today? How many have died? How many have recovered? The truth be told: nobody knows. We say one million “confirmed” cases based on those tested. There are millions yet to be tested. How many have died? Nobody knows. It is only those who died at health facilities that we know. How many have recovered? We don’t know. Many will not have symptoms at all even though they are positive. Many will have only mild symptoms and treat them without even knowing they had COVID-19. Such data will go under the radar. In summary, therefore, please keep safe. The statistics cannot tell the entire story. Caution.

Akwa Ibom has astonishingly rejected the five confirmed COVID-19 cases in the state. The Nigeria Centre for Disease Control (NCDC) had announced the new cases but Dr Dominic Ukpong, Akwa Ibom commissioner for health, debunked it, saying the positive cases were not showing symptoms (very strange that any commissioner, much less a doctor, does not know that COVID-19 could be asymptomatic) and that “due process” was not followed in reporting the test results. As someone noted, are we now dealing with election results in which one party will reject the outcome and drag NCDC to the tribunal? I don’t understand what Akwa Ibom is trying to do. Baffling.