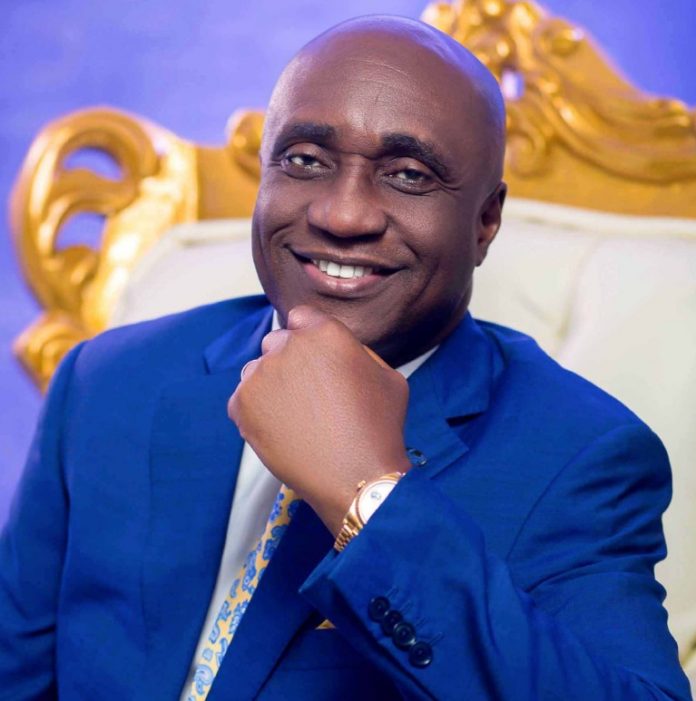 The founder and presiding Pastor of Salvation Ministries International, Pastor David Ibiyeomie, is leading an ambitious strategy to build transgenerational leaders – statesmen, akin to Nelson Mandela, Kwame Nkrumah, Obafemi Awolowo, among others. A leading voice in the propagation of the gospel, he founded the Church which started as an inchoate assembly on the 13th of April 1997 in Port Harcourt, Rivers State, Nigeria’s oil metropolis, with 34 members: 15 males, ten females and nine children in attendance. Today, the Salvation Ministries has become a global movement with millions of members.

Through the David Ibiyeomie Foundation and the Chokhmah International Academy, a model school in Port Harcourt, the passionate preacher has committed to building leaders and equipping them with the requisite blend of character and sound education, that will birth the Africa of our dreams. His fervent faith in the interplay of quality education and sound morals within the school system was evident in the first few minutes of our interaction.

In line with the Sustainable Development Goal 4 of the United Nations, which promotes inclusive and equitable quality education, the Foundation has provided education intervention for over 8000 learners through scholarships that cut across the broad spectrum, including Kindergarten; primary; secondary and University education.

A recent report by UNESCO, pointedly states that, of all the regions, Sub-Saharan Africa has the highest education exclusion rate in the world. The report further says that over one-fifth of the children between the ages of 6-11 are out of school, followed by youths between the ages of about 12 and 14. In Nigeria alone, more than 13 million children of school age are not in school. This becomes all the more worrisome when stacked against the growing security crisis and the country’s youthful population bulge.
This yawning gap and apparent mismatch in the number of children within and outside the school system is precisely what David Ibiyeomie is addressing through his monumental investment in education.

Mr Ibiyeomie’s leadership transcends the pulpit, as he strives to help the continent overcome the twin challenges of poverty and poor leadership.
In Nelson Mandela’s words, “education is the most powerful weapon that you can use to change the world”. This statement fittingly describes the propelling philosophy behind Mr Ibiyeomie’s strong commitment to pursue his education-for-all agenda. Nothing better describes his fierce allegiance to this creed than his unwavering passion to stake all in his pursuit of building the next set of leaders that will help place the continent on the path to sustainable development.

Findings have shown that multi-stage leadership education model, which is multidisciplinary, global, and ethics oriented, is undoubtedly the remedy for many of the leadership challenges facing the continent today. It is in filling this void that the David Ibiyeomie Foundation and Chokhmah International Academy were created.

“The real problem in Africa is not the absence of politicians, but the absence of statesmen“, Ibiyeomie said as we settled for an extensive interview at the Church’s headquarters in Port Harcourt. Continuing, he said, “there is a difference between a mere politician and a statesman.  The typical politician thinks about the next election circle, but the statesman thinks of the next generation.”

With his eyes set on statesmen’s making, Pastor Ibiyeomie envisions a solid educational eco-system that provides a frame of reference in excellence to potential students.
Chokhmah International Academy was set up as a centre of excellence in learning and character. When our team toured the school’s boarding campus situated at a serene environment in the outskirts of the bustling Port Harcourt city, we met a campus with an enthralling ambience. From a group of students learning hyperbaric welding and fabrication skills by the simulation to another group mastering the rudiments of sound engineering and music video creation in a laboratory, we saw a well-provisioned campus set to train Africa’s new generation of leaders.

The boarding campus sits on a vast land, behind the ongoing Salvation Ministries cathedral project – which promises to be an impressive architectural masterpiece on completion. Chokmah International Academy’s day school located in the mainly residential suburb of the city known as D-Line is similarly well equipped. Here, we see the buildings housing the Kindergarten, primary and secondary students, which provides the entry point to a world of grit and leadership.

” I will let you know something,” Ibiyeomie says, as he tries to explain why he pulled no stops in building a world-class structure. “I am trying to create a balance,” he continued, “You’ve been to the premises, but there are two sides to our vision. If you have ever been to many Christian-based schools, they have values but always seem to lack facilities. And if you go to many secular schools, they may have facilities, but they tend to struggle in terms of the values learners internalize. So, I aim to strike a balance such that academic excellence is supported by sound character,” he concludes.

Therefore, it was easy to reconcile what we saw on the ground versus our understanding of education as a social enterprise. With the world-class facilities that feature prominently across all the schools visited, it wasn’t difficult to glean that for Pastor Ibiyeomie; education is not a commercial enterprise. We found out that nearly 45% of the students in these schools are on full scholarship, while others are highly subsidized. When our team arrived in Port Harcourt for an interview with David Ibiyeomie, yet another school had just been completed that will provide 100% tuition-free education to children whose parents could not afford to send them to school. The school, located on Aggrey Road in central Port Harcourt, has an independent selection committee to guarantee a merit-based admission. The selection process typifies David Ibiyeomie and his natural affinity to meritocracy. This illustrates why his philanthropy touches different tribes, tongues and nationalities – often unknown to him.

A story was told of how on one of his trips, a certain young man caused a stir at the Airport as he approached Pastor Ibiyeomie to thank him for changing his life for the better through a scholarship to study Medicine in the University, The young man, said, “Pastor, I am one of the young me that you gave scholarship to study Medicine. I have since completed my studies and now work as a doctor.” The young man continued, “if it were not for you, I would not have gone to school.” Startled, Pastor Ibiyeomie prayed with him to excel in his medical practice. The young man’s story represents that of many who have benefited from Ibiyeomie’s benevolence. Mr Ibiyeomie was also recently commended by the Rivers State government for donating a fully built and furnished 400 capacity hostel to the state-owned Ignatius Ajuru University of Education.

In a country with very poor national minimum wage standards, David Ibiyeomie keeps upping the ante with respect to salaries and wages. While the National minimum wage is put at about $77, teachers and other staffers in David Ibiyeomie’s schools earn more than five times the national minimum wage. Staff are also provided with fully furnished accommodation and round the clock access to other world-class amenities. At the tertiary level, David Ibiyeomie and the Salvation Ministries have already concluded plans to build the Pacesetter University on a massive 214-hectares of land, some kilometres away from the Port Harcourt International Airport. The University, which is conceived as a centre of innovation in teaching and research, aims to build strong partnerships with academic and industry leaders globally.

Away from education, Mr Ibiyeomie has donated over $30 million in business and entrepreneurial grants, as well as other business support projects. The David Ibiyeomie Foundation’s business development support is geared towards promoting sustainable economic growth and productive employment. Through the Foundation, the schools and other institutions, Mr. Ibiyeomie has created thousands of jobs across Nigeria. Remarkably, there is an ongoing programme to double the schools’ workforce and other related organizations, which are designed to help in depopulating the unemployment market in Nigeria. Mr Ibiyeomie is creating employment opportunities at a time when even governments across the continent are either downsizing or rightsizing, owing to the COVID-19 disruptions.

But Mr Ibiyeomie’s philanthropy straddles different age groups. Beyond equipping the young with character training and quality education, the   David Ibiyeomie Foundation has also built a befitting home for the elderly at the heart of Port Harcourt city. This is designed to cater to the often-neglected senior citizens of the society. He feeds, houses and provides for their up-keep in fulfilment of the biblical injunction – “honour your father and your mother, that your days may be long.” An academic and former Commissioner for Information in Rivers State, Dr Austin Tam-George, captures the life of Mr Ibiyeomie succinctly in his article titled: THE EXAMPLE OF PASTOR DAVID IBIYEOMIE. According to Tam-George, Ibiyeomie’s impact as a cleric has grown exponentially over the past two decades because of his generous and exemplary life. In his words, “Pastor Ibiyeomie recognizes that there is no sermon greater than the power of personal example.”

“This is why in the past 20 years, Pastor Ibiyeomie and the Salvation Ministries have spent billions of Naira in humanitarian relief efforts. They have built free schools for forgotten children, and granted scholarships to thousands of students in Nigeria and abroad,” the article reads. Dr Tam-George maintained that “in a morally vandalized world, dominated by leaders blinded by the cataract of corruption, Salvation Ministries has emerged as an important oasis of hope.”

Despite appreciable progress on several frontiers, Africa is still a continent at the crossroads of development. But with almost 60% of the continent’s population under the age of 25, Africa is the world’s youngest continent. While many of the continent’s politicians may worry about the future of Africa’s extractive economy, with their eyes fixed on the rise and fall of commodity prices in the international market, visionaries like David Ibiyeomie recognize the youth as the continent’s most precious asset.

By investing so adroitly and selflessly on the education of young people on the continent, Mr Ibiyeomie is not only creating a new generation of leaders but is helping to create a knowledge and skills-based economy that places Africa firmly on the path of growth and sustainable development.