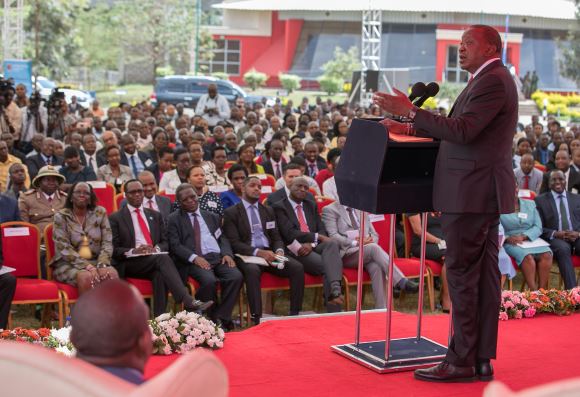 President Uhuru Kenyatta today said the Government will streamline its processes so that it accords Small and Medium Enterprises (SMEs) the support they deserve.

“The SME community represents 75% of the country’s workforce and we need to sit down and know how we will respond to the industry. We owe it to them,” President Kenyatta said.

The President admitted that the Government, both National and County, need to improve on their level of support for small and medium enterprises.

“This is a conversation that has just began and you will see more action,” said the President who spoke at the Strathmore Business School where he attended a forum on the growth of SMEs.

The Head of State said the Government needs to refocus its attention on small business enterprises adding that a similar forum will be held at the same venue within two months after Government fulfils some of its outstanding pledges to the SME sector.

While commenting on the cost of doing business in the country, the President directed energy cabinet secretary Charles Keter to review electricity tarrifs for SMEs.

“I direct the Energy cabinet secretary to review electricity tariffs within one month and come up with a sustainable plan to ensure the cost of power to small and medium-sized enterprises is brought down,” President Kenyatta ordered.

Speaking at the event, Deputy President William Ruto said SMEs form the biggest means for the achievement of the Government’s Big Four Agenda.

“There could not have been a better collection of supporters of the Big 4 Agenda. This forum covers the whole spectrum of the Big 4,” said the Deputy President would also underscored the key role SMEs play by being the single biggest creators of jobs for Kenyans.

Trade and Industry Minister Peter Munya echoed the President’s call that the Government should do more to support SMEs.

On his part, Nairobi Governor Mike Sonko said the Nairobi County Government will work closely with the National Government to support SME traders especially those in markets like Gikomba.

The forum, organised by the Strathmore Business School, NIC Bank and the Government, attracted representatives from all sectors of Kenya’s small and medium enterprises.

Some of the recommendations reached at the forum include prompt payments by government to SME contractors and realignment of TIVET institutions to produce more skilled graduates.

The traders also called for more government support for the aquaculture sector where Kenya is said to have a potential to produce 11 million Metric Tonnes of fish as opposed to the less than 400,000 tonnes it produces currently.

Traders based in Nairobi have asked for government organised exhibitions where traders and manufacturers can advertise what is produced in the city.

Textile producers requested the Government to make it mandatory for workers to dress in African attire on at least one day of the week in order to promote local designers and manufacturers.