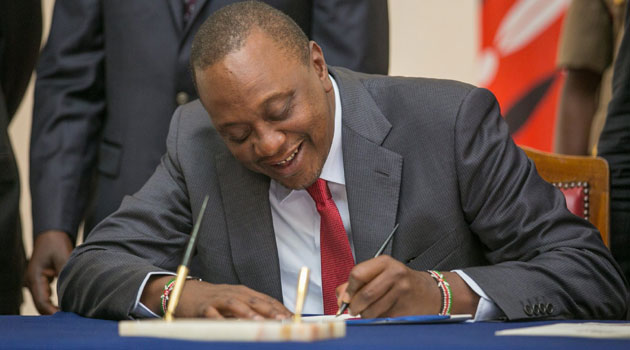 Kenya’s President Uhuru Kenyatta this morning at State House, Nairobi signed the Division of Revenue Amendment Act to increase conditional allocations to the County Governments for the 2018/19 financial year.

The Division of Revenue law provides for the sharing of revenue raised nationally between the National and County governments.

The amended statute on Revenue allocation was presented to President Kenyatta by Senate Speaker Ken Lusaka and the Leader of the majority in the Senate Kipchumba Murkomen.

The schedule of allocations indicates that the total shareable Revenue between the National and County Governments stands at slightly over Sh1.688 trillion of which the National Government is allocated Sh1.370 trillion.

Under the increased allocations, County Government Equitable Share stands at Sh 314 billion and the County Equalization Fund at Sh4.7 billion.

The National Government’s share under the increased allocations includes Sh4.3 billion earmarked as a special grant to the National Health Insurance Fund (NHIF) for the Free Maternal Health Care which is supposed to be disbursed as reimbursement to county governments.