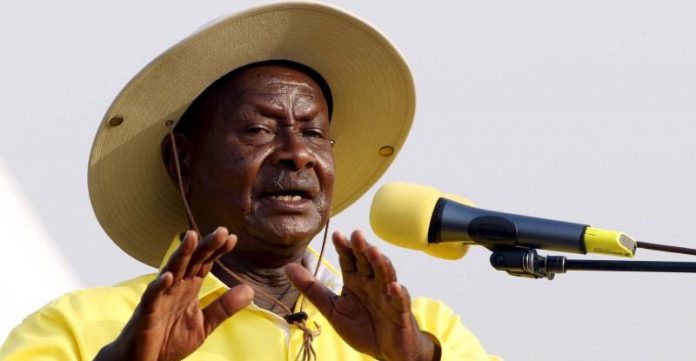 Uganda’s President Museveni has congratulated the people of Teso Sub-Regi-on in Eastern Uganda for uniting and creating linkages between the people of Africa from Kenya, Ethiopia, South Sudan, Tanzania and Congo through the cultural celebrations they hold.

The President was speaking as Chief Guest during 5th Teso Heritage Day celebrations at Boma grounds in Kumi District.

The celebrations ran under the theme ‘Unity is the Key to Development’.

The Teso Heritage Day celebrations bring together Itesots from the regions of Teso, Karamoja, Turkana in Kenya and other areas to forge unity and celebrate their rich culture through dance and folk singing.

In his address, the president told the jubilant crowd that in order to have a strong Africa continent, modernity should be mixed with tradition. He, however, noted that cultural leaders must sit down and weigh some of the merits and demerits of cultural practices like wife inheritance and drinking alcohol.

“I do not want you to throw away the traditions because many of them are good. You Itesots like ‘Ajono’ (local brew) because when I was at University some of the Itesots would say that drinking was part of their culture. Even some Banyankole would say the same. I do not take alcohol. That is why I am 74 and still very strong,” he said.

The President was also glad to note that the tribes from the Atekergroup of Teso were no longer killing themselves as they were now considering themselves as brothers. He, however, informed the people that they should not focus so much on identity because it can be a hindrance to development.

“The African people have got sub-nations like you can hear from the Ateker. I do not want mobilization of identity against each other. When a Muteso has got a shop here in Kumi, tribe will not matter. Anybody buying from you will be supporting you,” he noted.

The President further called for regional integration saying that this was the way to the prosperity of Africa.

On the development in Teso Sub-Region, the President said that Moroto – Dokolo – Lira road has been tarmacked adding that Tirinyi road is being worked on.

The Emorimor (King) of Teso, Augustine Osuban, who emphasized the importance of culture, thanked President Museveni for honoring his invitation to join the people of Teso in their celebrations. He noted that this was the second time the President celebrated with them.

The Prime Minister of the Iteso cultural Union, Emolot Paul Sande, emphasized the need for unity saying that it was the only way that human civilization could grow.

He added that it was because of unity that the Iteso has been able to reconnect with their people in the diaspora.

“Because we Iteso people belong to one group called Ateker, we have launched deliberate moves to build alliances with other Ateker from Tanzania, Kenya, Topotha, South Sudan, Ethiopia. We now have Teso and Ateker cultural Ambassadors in the United States, UK and Ireland,” he said.