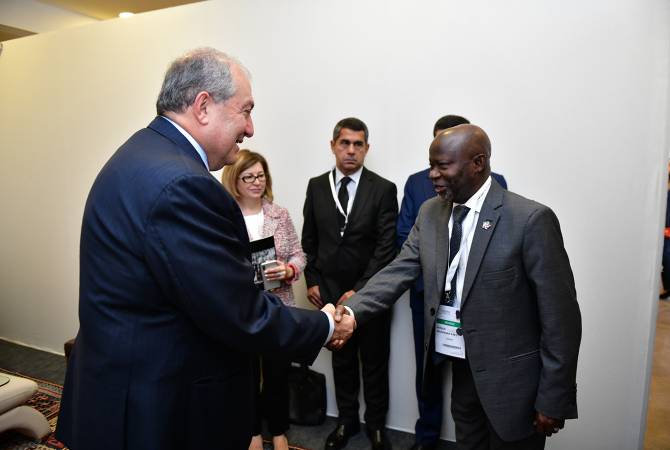 Gambia was granted observer status in the La Francophonie during the Yerevan summit.

Sarkissian and Darboe attached importance to the recently signed agreement on establishing diplomatic relations between Armenia and Gambia.

Speaking about mutually beneficial cooperation, the sides namely discussed possible partnership in IT, as well as issues concerning the development of ties with other countries of the African continent.

Yerevan is hosting the XVII International Organisation of La Francophonie summit in 2018.

Armenia is a member of the organization since 2008.

The International Organisation of La Francophonie represents one of the biggest linguistic zones in the world. Its members share more than just a common language. They also share the humanist values promoted by the French language. The French language and its humanist values represent the two cornerstones on which the International Organisation of La Francophonie is based.

The International Organisation of La Francophonie was created in 1970. Its mission is to embody the active solidarity between its 84 member states and governments (58 members and 26 observers), which together represent over one-third of the United Nations’ member states and account for a population of over 900 million people, including 274 million French speakers.

IOF has concluded 33 cooperation agreements with international and regional organisations and has established permanent dialogue between the major international linguistic zones (the English, Portuguese, Spanish, and Arab-speaking zones).

The IOF has its head office in Paris as well as four permanent representations in Addis Ababa (at the African Union and at the United Nations Economic Commission for Africa), in Brussels (at the European Union), in New York and in Geneva (at the UN). It has three regional offices (West Africa ; Central Africa and Indian Ocean ; Asia-Pacific) located respectively in Lomé (Togo), Libreville (Gabon) and Hanoi (Vietnam) and two regional antennas in Bucharest (Romania) and in Port-au-Prince (Haiti).