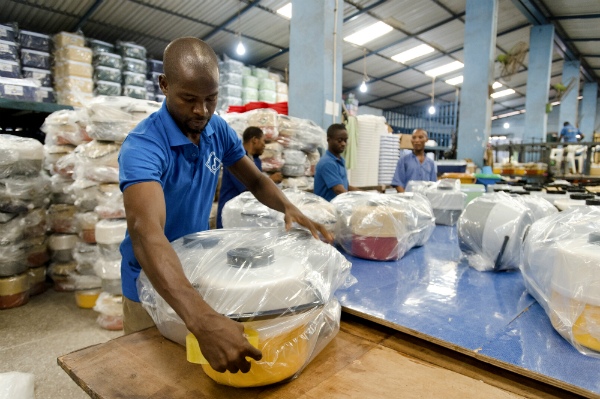 The term Trade Driven begs many questions. However, this can only imply that the continent (Africa) is now ready to take a different shape in the way it conducts its day-to-day activities in various sectors from trade, health, energy, among many others. Earlier this year, conversations about AFCTA and INTRA Africa trade took centre stage and almost all African countries opened their doors for the idea.

The Republic of Ghana remained Historical for having and still serving as the official residence of the African Continental Free Trade Area (AFCTA). The country remained in the spotlight and was recognized for being the world’s largest trade area since the formation of the World Trade Organisation.

According to H. E MoussaFaki Mahamat, Chairperson of the African Union Commission (AUC), “Ghana is a historical trading centre and remains an important centre of commerce on the continent and beyond’’.

The continent is now shifting its gears and is now trying to welcome new ideas on how it can propel the much-welcomed idea of Free Trade Area and Intra Africa trade, among others.

.“An increase in trade is the surest way to deepen regional integration in Africa.”….Nana Addo Dankwa Akufo-Addo, President of the Republic of Ghana.

And so, that is where the concept of promoting trade-driven industrialization comes in. I bet by now we already know what industrialization is and of course, the next big question is how do we actualize this process? or is it the ultimate long-term solution towards a Global level of trade?

To answer this question individually, pause for 2-3 minutes, take a deep profound breath and then try to visualize what an expert would say about this very simple yet elucidative question on trade-driven industrialization.

According to Mr. Peter Biwott, a development economist based in Kenya, trade plays a critical role in ensuring our economy grows. He puts it out that for African countries to materialize, they will need to look at markets beyond borders. This will enable the transition to a higher economy, promoting trade-driven industrialization.

“If we have to grow industries of high markets, you must sell products outside your country. Japan for instance is developed, yet it is a small country. Therefore, trade-driven industrialization is a good thing because, for countries to industrialize, they’ll have to look at markets beyond borders.” “Japan”, he points out’ “despite it being a small country, exports motor vehicles globally. And as a result, Japan has transitioned to a high-income economy and has built sophisticated Industries.” …. Mr. Peter Biwott, a development economist.

There might be mixed feelings that different governments may have different objectives regarding the topic in question. However, small talks amongst Africans suggest that the leaders might be tempted to behave in a manner that suggests a dissociation from the weight attached to them as a result of this. Although One thing that is guaranteed for sure is that they will support trade-driven industrialization, for it can alleviate poverty and reduce income inequalities in Africa.

Agenda 2063 places great importance on trade roles in developing economies and recognizes that trade is a powerful engine for economic growth and development.

According to early literature, industrialization was treated as a vital element in economic development. The experience of the industrial economies showed a close association between development and industrial expansion. The industries were also thought to provide certain spillovers which were in a big way expected to benefit other activities such as enhancement of skills, training of managers, dispersion of technology, and so on.

A trip down memory lane reminds us that in 1989 the United General assembly proclaimed 20th November as Africa Industrialization Day to mobilize what they termed as the international community’s commitment to the industrialization of Africa. The United Nations even dedicated the two decades from 1980 to 2000 to promoting industrialization in Africa.

Indeed, it is worthy of mentioning that the case for industrialization in Africa has been a discussion at the table, and the agreement at the end of it all has been that without the continent’s economic transformation Africa is unlikely to happen without significant industrialization.

I am glad that the debate is now changing and slowly but surely, African countries are now beginning to discover loopholes in the manufacturing Industries. The trade happening within the East African region is just one but a good example. Countries like Tanzania and Uganda export raw materials to Kenya which gets manufactured and exported back to the regional countries for sale. And if this continues with other regions within Africa, we will be sure to take it to an even global level.

“I’ll give you a good example. The other day we went to Busia on Namanga border post and on one of those days, we counted 160 trucks from Tanzania, and 123 trucks from Uganda all full of basic agriculture foodstuffs, like tomatoes. Why were they coming into Kenya? Because Kenyans are big consumers of these products. But Kenyan factories are then transforming these raw materials into finished products, and that is what I insist Kenyans are very good at it.  We take the basic raw material or basic food commodity and transform it into a higher value product that we sell back into the region. So, if you look at what our exports are, obviously they are massive as compared to what our imports are from the eastern region and that for me is where the game is” ………. Dr. Bimal Kantaria, agribusiness mogul based in Kenya.

Deliberate trade policies and practices consistent with African Countries ‘development goals could attract industrialization, which again could help to transform and strengthen the economies.

Over the past two decades, it has been worth noting that some African countries have been registering double-digit rises. This is because much of the growth has been fueled by high demands for mineral and agricultural resources.

Previously, for lack of a better word, China took advantage of us. But the conversation is now directed towards building our locally made industries within the continent of Africa.

Suppose you looked keenly at the Africa-China trade or Africa-Us trade or even Africa – European nations’ trade relationship, in that case, you will notice that Africa was transported raw products to countries overseas then buy them after as fully manufactured products simply because of what is termed as “lack of high-quality industries in Africa.

Countries like China are very good at exporting raw commodities and spending vast sums of money on manufactured imports. We as Africans have gotten the scope of the game and the challenge is now thrown to us to develop and come up with high-quality products to be at the global level of competitiveness. So China takes our primary goods and sells us manufactured ones since there is no involvement of skills transfers.

To wrap it up, by favouring the export of raw materials over processing goods, the African Continent denies itself the opportunity to add value through manufacturing, providing more jobs and generating additional revenue in Africa.

In my own opinion, If Africa decides to take a trade-induced mode of industrialization, then it should be interactive and coherent with a country’s national development strategy.