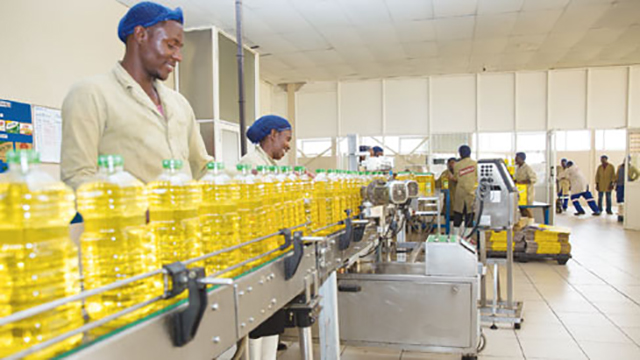 PURE Oil Industries, one of Zimbabwe’s major cooking oil producers, says it has invested $9 million towards supporting contract farmers to produce soya bean required for the manufacture of edible oils, with other producers expected to follow suit.

The Workington-based company’s head of operations, Rodreck Musiyiwa said in an interview that the company has contracted farmers over the last three years to produce soya bean.

This comes amid the acute shortage of cooking oil in the country due to limited availability of foreign currency required to import the major ingredient for the production of edible oils; crude oil.

As a company, Pure Oil Industries said it was currently supplying the domestic market with an average of 350 tonnes of refined cooking oil on a daily basis if production is not interrupted.

Without stating market shares for each of the major producers, including Surface Wilmar, Willowton, Olivine Industries and United Refineries Limited, he said producers had the capacity to meet demand if adequate raw materials were available.

Zimbabwe requires significant amounts of foreign currency to import crude cooking oil and related inputs for edible oils, as it is not producing enough soya beans to meet industry demand.

However, low industrial capacity, low imports and lack of access to external lines of credit have made it difficult for the country to obtain the requisite hard currency including for other key imports.

Zimbabwe was the leading producer of soya bean with national yields averaging over 100 000t per annum. After the land reform, the yields slumped with 20 000t being realized in 2010. The annual national requirement for soya bean stands at about $350 000t.

As such, Mr. Musiyiwa said, the company supported farmers with inputs enough to put 200 000 hectares under crop and the assistance entailed fertilizers, seed and chemicals.

“This is our third year of (support to) contract farming. And this is direct support to farmers where we give all the inputs from seed, chemicals, fertilizers plus agronomy services.

“This is our third year and if you look at a budget of $1 000 per hectare and we have done this for three years that works to $3 million, thus now $9 million we have put in.”

Mr. Musiyiwa said while the contract farming had not completely eliminated the need to import crude cooking oil, it had helped meet the shortage of this key raw material.

“For us it is about supporting the value chain because, how is it cheaper; it is because this does not require foreign currency and we are supporting our own farmers,” Mr. Musiyiwa said.

“Remember each time that we are importing, we are supporting farmers from other countries. For us we don’t necessarily look at what is cheaper, we look at what is viable.

“What is viable is for us to support our own farmers, in the long term these farmers will be capacitated,” he said.

Mr. Musiyiwa said other players in the oil industry have started talking about support farmers to produce soya bean.

Mr. Musiyiwa said Pure Oil Industries has been involved in soya bean contract farming over the last two years. The bulk of the raw material is currently being imported.

However, shortage of foreign currency results in hiccups to importation and supply of crude cooking oil causing shortages, which have seen the commodity being sold at steep prices. Zimbabwe loses $200 million through soya bean imports per year with at least $5 million required weekly to import soya bean, crude edible oils and related raw materials to meet the demand for cooking oil and other related products.

“What we would like to see is a situation where we get to the point where we produce enough to meet the requirements for our soya mill customers,” he said.

Mr. Musiyiwa said the ideal situation to ending the importation of soya bean would be a tripartite approach where banks, industry and farmers work together.

“We want the bank to have appetite to take the risk from the farmer because these farmers, remember, do not have collateral or security. We are happy that our banks are beginning to see that and come in on the back of us the off-taker and support the farmer.”