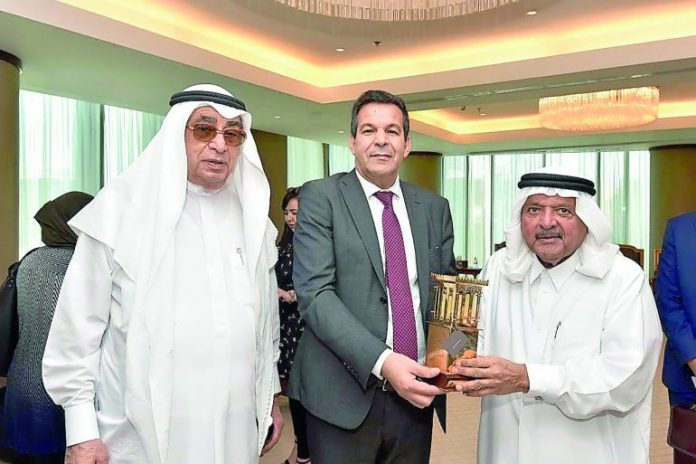 The Qatari Businessmen Association (QBA) held a meeting with Said Djellab, Minister of Commerce of the Republic of Algeria and his accompanying delegation.

Addressing the event, Sheikh Faisal stressed the importance of the Algerian market and the natural and economic resources of Algeria. Sharing his own experience as an investor, Sheikh Faisal highlighted Algeria’s investment potentials in various sectors, including in the agricultural and tourism sectors.

He also pointed out the keenness of Qatari businessmen to discuss the means of cooperation and investment in Qatar and Algeria as long as this cooperation achieves the mutual benefit of the two parties.

For his part, Algeria’s Minister expressed his happiness with this meeting, pointing out that such meetings confirm the strong brotherly relations between the two brotherly countries and called for the development of the Qatari-Algerian economic relations and increasing their growth rates to reach the level of the aspirations of the two countries.

He added that the Algerian market is large and promising and has many potentials and investment opportunities in different sectors such as mining, pharmaceuticals, tourism, industry, services and agriculture, which encourages the Qatari investor to establish businesses.

The Minister added that the State of Algeria is the gateway of Africa for its important geographical location between the continents of Europe and Africa, and has excellent relations with all African and European countries, and the Qatari investor can benefit from these features Hussein Al Fardan spoke about Qatar’s keenness to develop its relations with Algeria for its diversified investment opportunities in many sectors such as agriculture, tourism and industry, especially the food industries In his concluding remarks Sheikh Faisal confirmed QBA’s interest in the Algerian market and its investment opportunities.

The two sides agreed to activate the Qatari-Algerian Business Council, which will aim at creating the right environment for investment and exploring the potential investments projects that could be of interests to both countries.

Both sides exchanged souvenirs at the end of the meeting The trade exchange between the two countries reached QR163m in 2017,22 per cent up from the previous year. Also, there are about 115 Qatari-Algerian companies operating in the Qatari and Algerian markets.