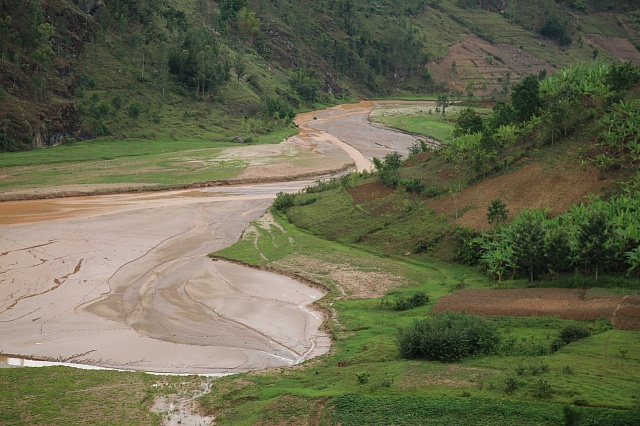 A Rwf71 billion ($79.93m) Kayonza Irrigation and Integrated Watershed Management Project (KIIWP) that will operate in eight of Kayonza District’s 12 sectors was launched on Tuesday, September 15 and is expected to contribute to poverty reduction in the drought-prone district.

The objective is meant to ensure food security and income of 50,000 rural households on a sustainable basis and build their climate resilience. The development is a result of a funding agreement between Rwanda and IFAD signed by Agriculture Minister, Gerardine Mukeshimana and IFAD President, Gilbert F. Houngbo in Italy, on June 22, 2019.

Kayonza is the second largest district of Rwanda and one of the most arable districts of the country. However, it has been massively affected by droughts in most of its sectors.

In 2016, the Eastern Province was affected by a severe drought, and more than 47,000 households in the districts of Kayonza, Nyagatare, Gatsibo Ngoma and Kirehe became food insecure, and the Government had to provide food relief and water for livestock to support the affected districts.

The KIIWP project is targeting to develop irrigation infrastructures under 2,275 hectares of arable land, construction, rehabilitation and upgrading of 15 valley tanks, drilling and installation of 10 boreholes, as well as the construction of six farm ponds.

The project will mainly operate in Gahini, Kabare, Kabarondo, Murama, Murundi, Mwiri, Ndego and Rwinkwavu. The sectors are hot and have lower rainfalls averaging 900 mm per year.

Gratien Rutaremara, a resident in Macuba Village, Murundi Cell in Murundi Sector, has around one hectare of land, where he grows mostly maize; he recalls the 2016 drought that forced people to leave their homes for months in the search for food.

“Some people sold their houses; others would also sell iron sheets of their houses or their lands and go to seek life elsewhere,” he told The New Times.

The crop production will increase not only thanks to the water but also because the livestock will have more feed and provide more fertilizer for the crops, Rutaremara foresees.

“The first thing that a crop need is water, no matter how much fertilizer we put in, you get nothing when there is no water. If we get the irrigation, we will undoubtedly achieve development, unless a farmer fails to use the technology earnestly, but in this case, you can learn from others,” he added.

In any case, Rutaremara, 62, who has been in Murundi since 1994, recognizes that when there is rain in their area, their land is soarable.

Jacqueline Murekatete, a farmer from Gahini Sector, said, sometimes they would buy inputs like fertilizers and seeds only to get losses. “We cultivate on 2-3 hectares expecting tonnes of production, and end up harvesting a few kilos.”

“No farmer can make progress if their eyes are only on the climate,” she pointed out.

“We are ready to follow every guidance you give us in this,” she added.

“In different sectors, we will plant fruit trees to not only to boost the nutrition but to improve their economies,” he noted.

Eastern Province Governor Fred Mufulukye, said 2016 was the beginning of large irrigation projects in the province like Gabiro Agribusiness Hub in Karangazi, Nyagatare District, Nasho Irrigation scheme in Kirehe District, and now this one.

Following the 2016 climate crisis in the area, Governor Mufulukye revealed that President Paul Kagame instructed the concerned institutions to think of the sustainable solutions for the problem.

“Now what we want to see is the impact of these projects on the people,” he insisted.

His comments are echoed by Stephen Rwamurangwa, the coordinator of IFAD-funded projects in Rwanda, who stated: “In fact, the farmers are the owners of the project, others are just technical support, for the farmers, it is their lives and eventually the life of the country and the world at large.”

Minister of Agriculture and Animal Resources, Dr Gerardine Mukeshimana, said that the project is expected to improve Rwanda’s agricultural productivity and pave its way towards a self-sufficient nation.

“We must get massive production if we are to have a secure food population, ” she said, adding that If we are to live food secure in 2050, we must multiply today’s production per hectare at least 13 times.

The funding is a concessional loan with a maturity period of 40 years and a grace period of 10 years with an interest rate of 0.75 per cent interest rate.

The project area has a population of 262,967 people, of which 51.5 per cent are women, who often face a serious challenge of water scarcity.

Through KIIWP, it is expected that smallholder farmers will see an improvement in household food and nutrition security, income, and asset ownership, particularly amongst vulnerable groups including women-headed households and youth, according to IFAD.

Gakara Mine: Africa’s Gateway to The Rare Earths Mineral

WTO: 79 countries Supports Okonjo-Iweala for the Role of Director-General