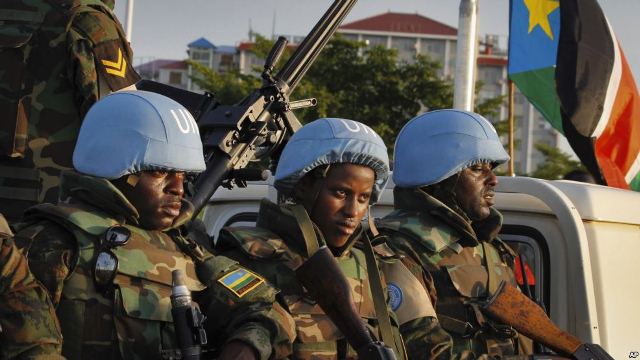 Sunday’s decision by President Salva Kiir, who in August rejected more peacekeepers, came a day after the 15-member Security Council visited the capital, Juba, to press senior officials for approval of the new force.

In a joint statement, the Transitional Government of National Unity of South Sudan and members of the United Nations Security Council agreed that humanitarian and security needs of the South Sudanese people must be priority.

South Sudan’s government has committed to permit the free movement of members of the United Nations Mission in South Sudan (UNMISS) in conformity with its mandate to protect civilians.

“To this end, the Transitional Government of National Unity commits to devising a plan with UNMISS by the end of September 2016 on concrete steps to remove impediments to UNMISS’s ability to implement its mandate, including reviewing procedures related to movement of UNMISS and streamlining bureaucratic processes,” read the statement.

South Sudan government and United Nations members agreed to “work in a fresh spirit of cooperation to advance the interests of the South Sudanese people, particularly their aspirations for justice, liberty, and prosperity.”

The new regional force, designed to protect civilians in the capital, would bolster the more than 12,000 peacekeepers already in the region.

The visiting Security Council envoys on Saturday also toured a U.N. refugee camp in the capital, where tens of thousands of civilians have lived in squalor and fear during nearly three years of fighting between forces loyal to Kiir and rebels trying to drive him from power.

Afterward, U.S. Ambassador Samantha Power called the Security Council visit “extremely important…because it’s our chance to see the human consequences of the failure of political leaders to bring peace back to their country.”

The two sides signed a peace deal in August 2015 that elevated Machar to first vice president. But the shaky accord broke apart in July, when Kiir loyalists and fighters backing Machar fought a four-day battle in Juba that killed at least 300 people and wounded hundreds more — most of them civilians.

Machar has since fled the country. But analysts say his civilian supporters continue to be targeted, along with what Ambassador Power described Saturday as “a huge surge in sexual violence against women” who leave the crowded Juba refugee camp to gather firewood or other family necessities.