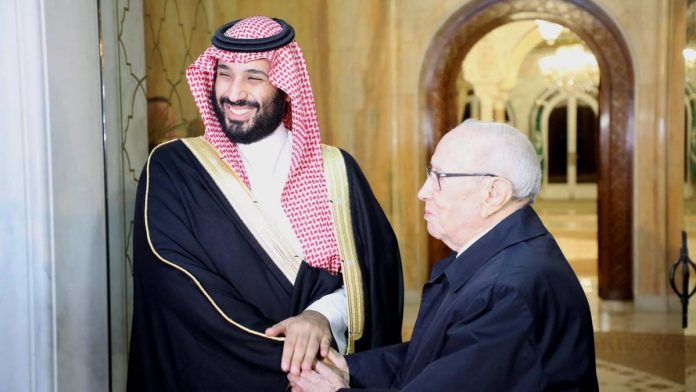 Saudi Arabia has pledged about $830 million in financial aid to Tunisia, Tunisian Prime Minister Youssef Chahed said on Saturday after a visit to the kingdom, where he also secured a series of loan agreements.

The sum is the largest Riyadh has promised the North African country in two years. Saudi Arabia pledged an $850m in financial assistance to Tunis during the Tunisia 2020 investment forum in 2016.

On Saturday, Mr. Chahed said that $500m was expected to finance the budget, $230m to finance foreign trade and about $100m to finance projects.

On Thursday, the Tunisian prime minister and Saudi King Salman signed two loan agreements to fund a Tunisian agricultural development project known as the Integrated Agricultural Development Project in addition to another development that aims to boost the supply of potable water to the rural Tunisian governorate of Bizerte, according to the Saudi Press Agency.

The SPA did not detail the value of the loans. It was also not immediately clear whether the loan agreements were included in the sums announced by Mr. Chahed on Saturday.

Last month, Saudi Crown Prince, Mohammed bin Salman, met Tunisian President Beji Caid Essebsi during the former’s visit to Tunisia. The official visit was intended to improve co-operation on the “economy and finance, investment promotion and security and military co-operation to counter extremism and terrorism”, according to the Tunisian presidency.

A day after the crown prince’s visit, government sources in Tunis told Reuters and Bloomberg that Riyadh would grant Tunisia a $500m loan at a favorable interest rate. “Tunisia will announce in a few days important deals with Saudi, including a loan with a low-interest rate, agreements on investment and other important details,” Noureddine Ben Ticha, the founder and owner of the online newspaper Al Jarida, later told Tunisian state television.

The North African country’s economy has been in crisis since the toppling of former president Zine El Abidine Ben Ali threw it into turmoil, with unemployment and inflation shooting up.