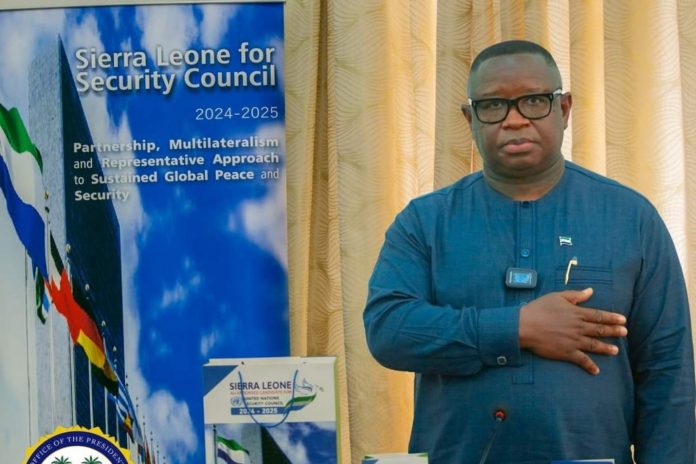 Sierra Leone on Monday launched a bid for a seat in the non-permanent category of the United Nations Security Council (UNSC).

The Council is one of six organs of the UN, and it has the primary responsibility of maintaining international peace and security. Sierra Leone served in the influential position once, from 1970 to 1971, since it joined the UN in 1961.

“Fifty-plus years after our 1970-1971 tenure on the Security Council, we are once again presenting Sierra Leone’s candidature for a seat in the non-permanent category of the United Nations Security Council for the period 2024-2025,” President Bio declared to an audience that included western foreign diplomats.

He said those two “unforgettable” years served as “bold footprints” that continued to define the West African country’s commitment to its international obligations and its unflinching support for a multilateral rules-based world order to advance and sustain global peace and security.

The ceremony was held on the theme: “Partnership, Multilateralism and Representative Approach to Sustained Global Peace and Security.”

The occasion also marked the unveiling of promotional materials for the campaign.
The UNSC presently comprises 15 member countries, five of whom are permanent members—China, France, Russia, the United Kingdom and the United States. Collectively known as P5, any five countries can veto a resolution.

The remaining ten members are elected to serve on rotating two-year, non-consecutive terms without veto power.

Africa has had between two and three seats in the ten non-permanent member slots, which Kenya, Ghana and Gabon currently occupy.

Voting for the next cohort of members of the non-permanent slot is slated for this June, during the UN General Assembly in New York.

Sierra Leone’s plan to bid for a seat in the Security Council had been rumoured about until Monday when the president publicly announced it. Reports suggested that the government had been mobilising support from friendly countries through diplomatic engagements, particularly on the continent.

The government said the bid isn’t about Sierra Leone exclusively, noting that it’s also part of a larger goal of attaining Africa’s long-held desire of a reformed UN Security Council.

Sierra Leone has been leading the African Union’s Committee of Ten (C-10), which is charged with negotiating the continent’s position on the reform of the UNSC, for about a decade now. Other committee members are Kenya, Equatorial Guinea, Republic of the Congo, Namibia, Zambia, Libya, Algeria, Senegal and Uganda.

The Sierra Leonean government hopes to use its war experience as the selling point for its membership, with President Bio announcing that the world has a lot to learn from its resilience.

“We owe it to the global family of nations to share our experience and lessons in peace-making, peacekeeping and peacebuilding,” the president said.

He also pledged the country’s commitment to pursue human rights protection and promotion and build confidence in democratic governance and the promotion of peaceful resolution of conflicts.