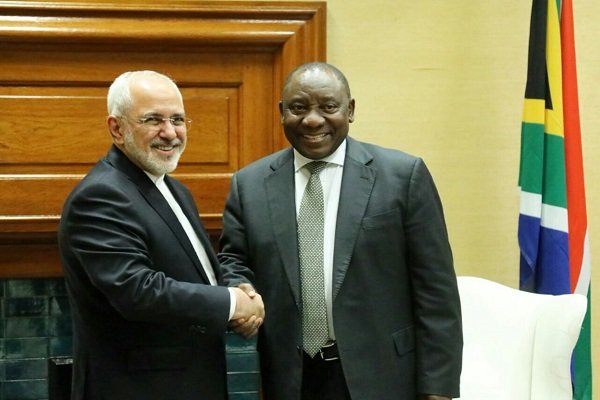 According to news report on Wednesday 13th June 2018, the meeting between Iran’s Foreign Minister Mohammad Javad Zarif and South African President Cyril Ramaphosa was aimed at producing positive agreement that will enhance the relationship between both countries.

Sequel to consolidating the bilateral ties between the two (2) countries, Mohammad Javad Zarif (Iranian Foreign Minister) also held a joint meeting with five South African Cabinet ministers. These ministries include: Foreign affairs, Defence, Development, Transportation, Trade). The priority of his discussion with these ministers was ways to promote and consolidate the mutual relationship between both countries.

This is not the first time that the Iranian foreign minister has visited South Africa. Before his arrival in Pretoria on Wednesday, Mr Javad Zarif had visited South Africa back in October 2017 where he attended the 13th joint commission meeting of both countries.

These two (2) countries had shared historical mutual relations. One of those relations was showcased when Iran supported South African Liberation Movement during the apartheid. The Islamic countries on the Persian Gulf also helped South Africa in 1979 and also restricted themselves from doing any business with the African country in protest against its apartheid policies. However, in January 1994, Tehran lifted all trade and economic sanctions against South Africa and diplomatic relations were re-established soon.