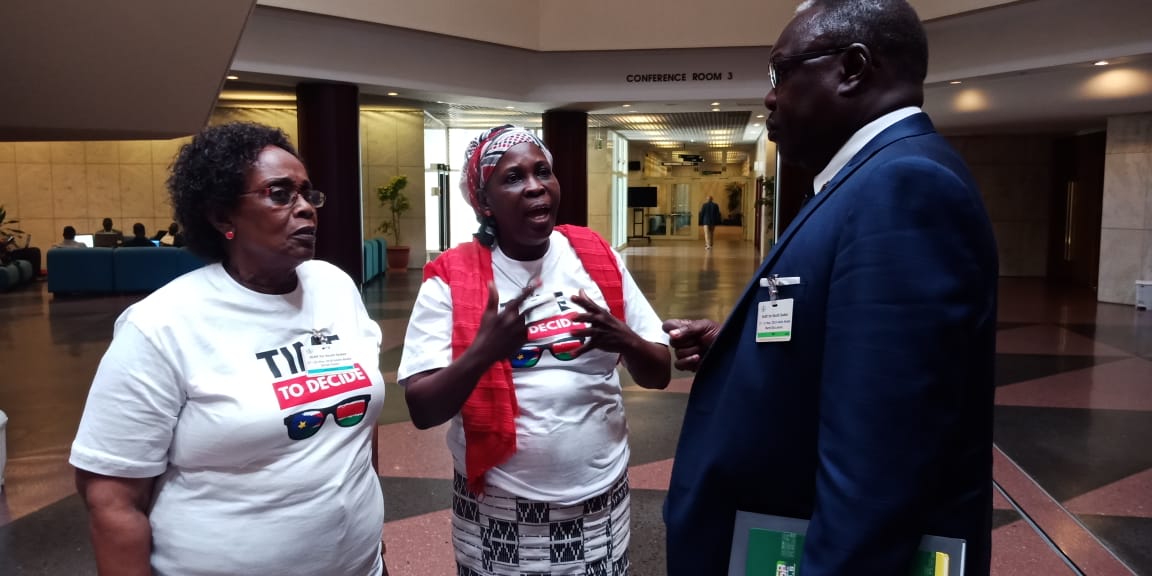 During a recently held peace forum in Addis Ababa, in an attempt to jump-start a peace process, women activists from South Sudan called for an end to conflict in the country and also demanded for increase in participation of women in all peace and development processes.

The South Sudan Women Coalition which represents refugee and diaspora communities, released a statement on the side-lines of the talks calling for a 35 percent allocation in all upcoming processes.

Speaking during the meeting, Zainab Yassir, a member of the group and her colleagues made a point to speak with leaders attending the talks, reminding them of their duty to promote peace in the country.

“We are wearing white today because we want to tell our leaders it is time for them to decide for our country, to decide for the peace. This is what the South Sudan people need,” she said.

Since the eruption of civil war in the later part of 2013, two years after South Sudan gain independence, the country is yet to see an end to fighting and violence in the country.

Although, there had been several agreements and ceasefires, which is supposed to end all sorts of rumbling and bring the country into a lasting peace yet, there seem to be no glimpse to the end of war in South Sudan.

These violence erupts as a result of clashes between President Salva Kiir loyal troops and forces loyal to Riek Machar, then the vice president, which has led to the destructions and killings of Tens of thousands.

In efforts to bring all of these to an end, the government and rebel groups signed the latest ceasefire in December in the Ethiopian capital, aiming to revive a pact reached in 2015. But the truce was violated within hours.

And in all of these, women and children have been the most effected as they have been scattered abroad seeking for refuge in countries like Uganda, Kenya, Sudan, Ethiopia, the Democratic Republic of Congo and the Central African Republic.

According to U.N., Children are at risk of malnutrition; many are unable to attend school and have been recruited by armed factions. Women have reported being raped after their husbands were killed.

Aid groups warn that almost two-thirds of the population will need food aid this year to stave off starvation and malnutrition as agencies prepare for the “toughest year on record”.

For these reasons, the peace forum in Addis was organized by the regional East Africa group, Intergovernmental Authority on Development (IGAD) between the government and rebel forces to seek solution to this problem.

“South Sudanese stakeholders asked to be alone and continue the consultations among themselves. We agree to it and since yesterday we have intra South Sudanese consultation ongoing. And so far, as far as I can see, it’s going very well and it will be very beautiful and recommendable, and this will make the people of South Sudan very happy and very proud if the South Sudanese, without any interventions from outside could come to a solution and lead their country into peace and stability,” said Ismael Wais, the IGAD special envoy to South Sudan.