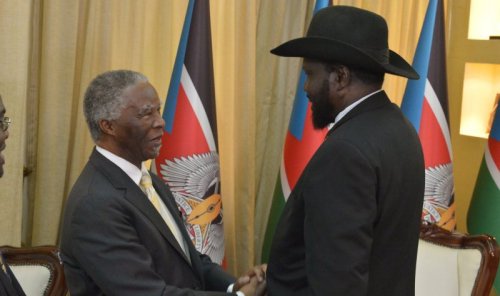 South Sudanese President Salva Kiir Kiir and the head of the African Union High-Level Implementation Panel (AUHIP) Thabo Mbeki agreed to coordinate their efforts and to work together to achieve peace in Sudan.

Mbeki was in Juba on Wednesday to discuss with Kiir his initiative to facilitate the African Union-led mediation to end the armed conflicts in the Two Areas and Darfur.

Sources close to the meeting told Sudan Tribune that the two sides discussed the one-process-two tracks approach adopted by the AUHIP and how the efforts of President Kiir can lead to reaching a comprehensive peace in Sudan.

President Kiir briefed the former South African president about the ongoing efforts to reunite the two factions of the SPLM-North and the consultations with the Sudanese government in Khartoum.

The South Sudanese presidency issued a short statement about the meeting saying the “consultative meeting” discussed the peace talks between the Sudanese government and opposition groups that Kiir plans to host in Juba.

President Mbeki “urged for active engagement and cooperation and a smooth facilitation of Sudanese peace talks that are going to be held in Juba,” said the Presidential Press Unit.

Khartoum welcomed the initiative of President Kiir and despatched the head of the Sudanese government negotiating team Faisal Hassan Ibrahim to brief President Kiir about a recent meeting Mbeki had organized between him and Abdel Aziz al-Hilu in Johannesburg.

The SPLM-N led by Malik Agar announced they met with Kiir and welcomed his initiative for the group’s reunification. But, the SPLM-N al-Hilu did not react to the initiative amid reports about consultations with the SPLM-N Liberation Council in the Nuba Mountains.

Also, the remaining opposition forces in Sudan including armed groups in Darfur say they have not been reached by Juba. South Sudanese officials say they work now on the SPLM-N reunification file and once they make process then they move to the second phase of the facilitation process.

Mbeki also took the opportunity of his first visit to Juba since 2013, to discuss the implementation o the cooperation agreement between Sudan and South Sudan and the need to resume talks on the border demarcation between the two countries.