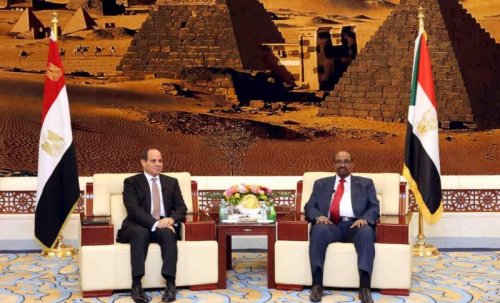 Sudanese and Egyptian leaders have agreed to enhance joint cooperation and build strategic alliances in all fields, emphasizing the importance of overcoming differences. This decision was made in a meeting held in Khartoum on Thursday evening,

“We want this relationship to be strategic in all areas of economic, commercial, cultural, security and military, as well as projects linking the roads between the two countries,” said Sudanese President, Omar al-Bashir.

He added that the visit of his Egyptian counterpart to Sudan, “comes within the framework of continuous communication initiated by President Sisi since he took office and his keenness to consolidate relations between the two countries.”

President Abdel Fattah al-Sisi said that his visit to Sudan comes within the framework of his firm and clear policy to strengthen relations between the two countries in all fields, and stressed that what binds the two countries is difficult to limit. Al-Sisi also used this opportunity to congratulate both Ethiopia and Eritrea on overcoming the differences, thereby creating an avenue to strengthen their ties.

He emphasized that the two countries have overcome many challenges and agreed on the projects related to electricity linkage, cooperation and coordination, stressing his country’s continued support to these efforts and remove obstacles to areas of cooperation.

His delegation included the ministers of foreign affairs, water resources and irrigation, agriculture and defence.

His last visit to Khartoum was about two years ago, in October 2016.