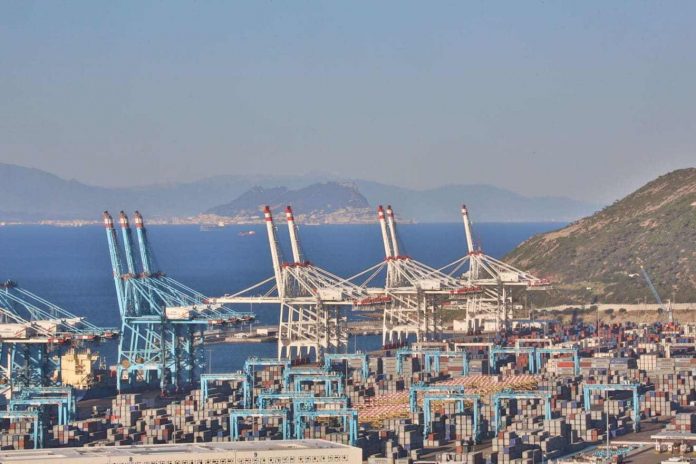 Morocco will open new terminals at Tanger Med port on Thursday, allowing it to surpass the Mediterranean’s largest ports Algeciras and Valencia in terms of container capacity, and drive more investment and manufacturing to the country.

Tanger Med, the biggest port in Africa with an annual volume of 3.5 million 20-foot equivalent units (TEU) in 2018, will add six million in capacity after its extension worth 1.3 billion euros, port director Rachid Houari said in an interview. Morocco hopes the port, which offers a platform for exports by local production plants of French car makers such as Renault SA and Peugeot SA, will reach volumes of 4.5 million TEU by this year’s end like Algeciras in southern Spain.

Authorities at the port on the western tip of the Mediterranean, just across from the Spanish coast, hope it can build on its role as a calling point for container shipping firms, especially between Asia, Africa and Europe.

“I hope we will add one million TEU of containers every year,” said Houari. He declined to estimate future volumes, saying only the original terminal had reached 3.5 million TEU in just six years. “Fingers crossed we will fill it up in six years,” he said.

Some 90% of container volumes passing through the ports are transiting to other destinations, he said. The biggest market, with a 40% share, is West Africa, where Moroccan firms have heavily expanded to in recent years. Some 20% will go to Europe and 10% to the Americas.

Morocco invested 1 billion euros in the first terminal which has created some 6,000 jobs at the port and 70,000 others in a trade zone in the area, he said.

The port is about 50 kilometers west of Tangier, the main city in northern Morocco, allowing space for expansion. Tangier also has a ferry terminal carrying some 40,000 people per day in the summer peak season as Moroccans living in Europe cross the Mediterranean. The terminals are operated by APM Terminal, and owned by Denmark’s Maersk, Germany’s Eurogate and a local firm.