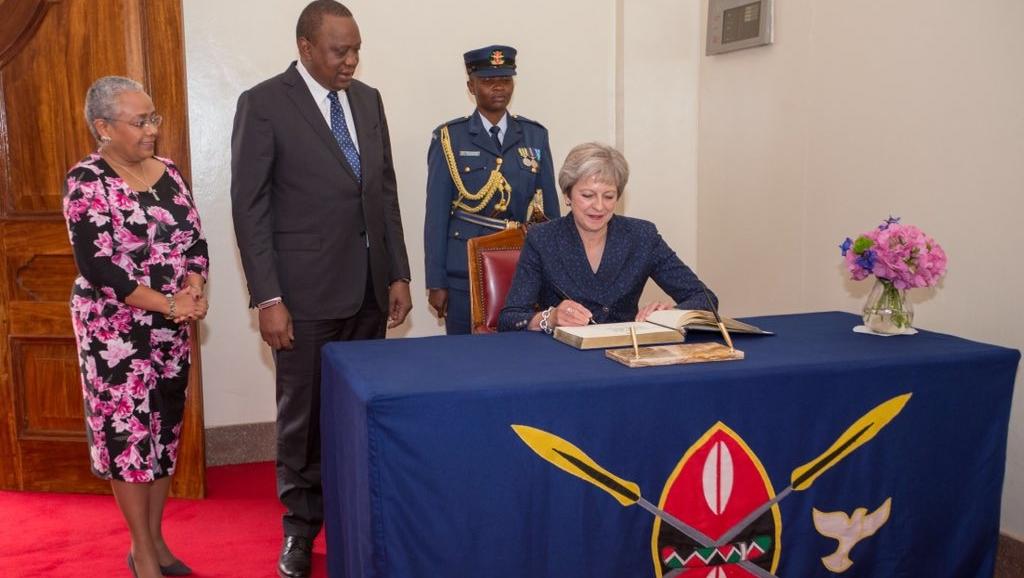 Theresa May, the British Prime Minister, has announced the emergence of twenty new United Kingdom businesses in Kenya, a move she described as a clear demonstration of the confidence the British business community has in Kenya’s attractive investment environment.

British companies are among the largest investors in country with companies employing over 250,000 people. While thanking President Kenyatta for his commitment to creating an enabling and conducive environment for the growth of the private sector in Kenya, Prime Minister May observed that British companies are known for their high quality standards and strict adherence to labour laws which are hallmarks of fair trade.

Theresa May said Africa is a continent destined for greater development having the most youthful population whose energy need to be harnessed through the creation of job opportunities by empowering the private sector.

She noted that economic prosperity in Africa can be achieved through partnerships between the business community and political leadership.

“As I travelled across Africa, I talked a lot about partnerships, the need for nations, governments and businesses to work together in order to tackle shared challenges,” said PM May. Referring to Africa’s youthful population as an economic asset, the British Prime Minister said:

“Here in Kenya you have some of Africa’s vibrant and creative young people. To harness their potential, the young people need access to food and well-paying jobs which can only be achieved through private sector involvement.”

In his remarks, President Kenyatta assured the private sector of his commitment and support to creating a conducive environment for doing business. The Head of State observed that the meeting between high level business delegation from Britain accompanying the PM and their Kenyan counterparts enabled by the Government was a clear indication that his administration places the private sector at the heart of Kenya’s economic development.

“With the Big 4 agenda in place, my Government is ready to offer any support to any investor willing to venture into any of the sectors involved including manufacturing so as to move this country’s exports up the value chain and supplement our existing export offerings,” said the President.

President Kenyatta said Kenya has become more competitive in attracting investments citing the World Bank Doing Business 2017 Report that placed Kenya at position 80 out of 190 countries surveyed as one of the indicators of this improvement. The Head of State pointed out that reforms undertaken by his Government are bearing fruit.

“To ensure a simpler and cost effective way of doing business, my government has established a one stop shop approach (in the setting up of businesses) to make it easy for the investors,” said the President. He added:

“In addition, the open data initiative enables access to not only data and government services through a single portal but also eliminates bureaucracy.” The President thanked the UK for being one of Kenya’s reliable partners in investments and trade.

“The UK is a major source of Kenya’s foreign direct investments(FDI), contributing around 40% of Kenya’s total FDI inward flows annually. Indeed, UK is the number one investor in Kenya,” said President Kenyatta.