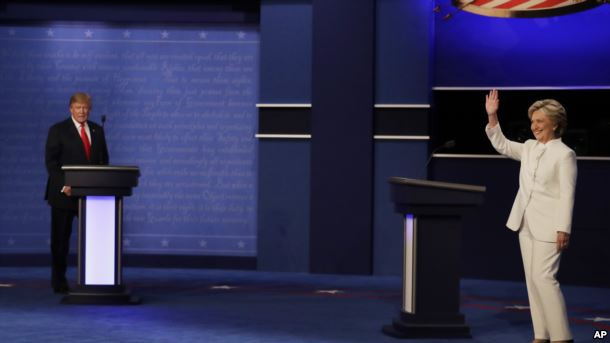 Republican presidential candidate Donald Trump further extended his campaign narrative that the election process is rigged against him by refusing at Wednesday’s final debate to say that he will accept the results of the November 8 vote.

“I will look at it at the time,” Trump said.

He added that he believes the media has “poisoned” the minds of voters against him and that his opponent, Democrat Hillary Clinton, should never have been allowed to run.

Richard Herrera, an associate professor at Arizona State University’s School of Politics and Global Studies, said Trump’s statement is “unprecedented” for a major party nominee and could be a turnoff for voters who are still undecided.

“That’s questioning the legitimacy of our own political system, which I don’t think people buy into,” Herrera told VOA. “They may not like government so much, and trust in government is low at this point, but they don’t really question that when they vote it’s not going to matter.”

After the debate, Clinton called Trump’s refusal an effort to “blame someone else for where he is in the campaign.”

One of the most contentious sections of the debate featured Trump and Clinton sparring over Russia’s espionage activities and accusations they are working to help Trump’s campaign.

“They have hacked American websites, American accounts of private people, of institutions, then they have given the information to WikiLeaks for the purpose of putting on the internet,” Clinton said. “This has come from the highest levels of the Russian government, clearly from [President Vladimir] Putin himself, in an effort, as 17 of our intelligence agencies have confirmed, to influence our election.”

Trump said he does not know Putin and reiterated his stance that better U.S.-Russian relations would be good. He added that Putin has “no respect” for Clinton or President Barack Obama.

Herrera said there is a long history of Americans being wary of Russia and that there remains an uncomfortable feeling about being too friendly with the Russians. He said Trump is not likely to gain support by saying the source of the hacks remains unknown and suggesting such cyber-attacks against Clinton would be a good thing.

“For voters for whom that matters, our relationship with Russia as well as Russian influences, they would not gravitate toward his views,” Herrera said.

Shirley Warshaw, a professor of political science at Gettysburg College, said Clinton has been annoyed by the hacking of Democratic National Committee emails and those from her own campaign, and that if Republicans had instead been the victims “they would be beside themselves.”

“The United States government has said very clearly that this was done by a foreign power, particularly the Russians, and Mr. Trump denied it,” she told VOA.

Warshaw also said there was nothing new in terms of policy in this debate, which meant it did not change anyone’s mind.

“This is campaign rhetoric that they’ve both been out on the campaign trail saying it over and over again, and essentially what both of them had was the same stump speech that they’ve been giving day in and day out,” she said. “If you took each of them off the debate they could easily have been giving a speech somewhere.”

Trump called Clinton’s tax plan a “disaster” that would potentially double people’s taxes, while she said he would add to the national debt by advocating for the largest tax cuts the country has ever seen. On the Supreme Court, Clinton said she would appoint judges who protect marriage equality and a woman’s right to an abortion, while Trump said he wants judges who would overturn abortion rights and protect those involving guns.

The candidates also sparred about Clinton’s record as a senator and secretary of state, something she says gives her the experience to be president while he has criticized her as contributing to failing policies and helping spawn the Islamic State militant group.

“On the day when I was in the Situation Room, monitoring the raid that brought Osama bin Laden to justice, he was hosting the Celebrity Apprentice,” Clinton said.

“I say the one thing you have over me is experience, but it’s bad experience because what you’ve done has turned out badly,” Trump said.

“That central point about ISIS would not exist had it not been for certain vacuums that created is a theme that he’s been pushing constantly, and it is related to his other theme, which is why haven’t you done something about this before?” Herrera said.

“He’s clearly picking and choosing, but nonetheless it can be very effective to pick and choose those things that people care about and certainly they care about the Middle East and our involvement in it and what they see as – and I think he’s portraying it as – a failure on the United States’ part and at the expense of the rise of Russian influence especially in Syria.”