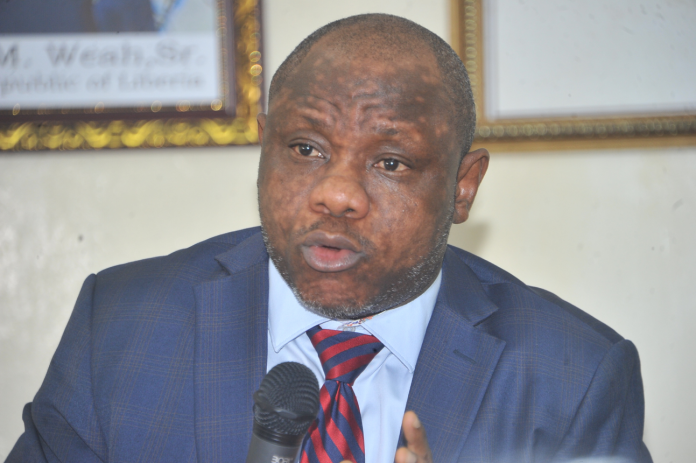 The Senate Committee on Public Accounts and Audits has in a report confirmed the assertion made by Minister of Finance and Development Planning, Samuel Tweah, that he received a nod of approval from the Legislature to divert US$25 million of US$50 million intended only for the National Road Fund to settle government salary obligations.

The fund was established to defray the cost of road maintenance across the country through the collection of levies on petroleum products.

Citing extreme economic conditions, Tweah earlier explained that the Executive sought approval from legislative leaders and development partners to use the money — a request that was approved — leading to the diversion of millions of dollars from the National Road Fund to settle civil servant salaries, in violation of chapter 2.2 of the Act that created the National Road Fund.

The Senate Committee report, which has now confirmed Tweah’s assertion, is the same as the House of Representatives Public Account Committee report. Both reports claim that the Legislature re-appropriated the money.

Citing the National Budget fiscal outturns, the Senate likewise the House said that during the 2019/2020 budget, they reduced the road fund budgetary allotment from US$29 million in 2019/2020 to US$22.3 million, a variance of US$7 million, which the General Auditing Commission says is owed to the road fund.

“The Senate Public Account Committee would like to inform the public that the ( variance of ) US$7 million as reported by the Auditor General as owed to the road fund was re-appropriated by the Legislature during [the] 2019/2020 recast budget to address critical national issues because of COVID.

“The Legislature initially approved the amount in the FY 2019/2020 budget for Road Fund. After the submission of a recast budget by the Executive due to low revenue collection as a result of COVID, the Legislature did a recast of the budget under review and reduced the Road Fund for the same period to $12 million. That the consultation and approval the Minister of Finance was done with the Legislature during the recast budget process referred to above.”

“The Committee reports that any future audit of the Road fund should fully capture final budgetary appropriation made by the Legislature to the Road Fund Authority.  Also, the committee recommended that for future audits of the Road Fund, the Road Fund Steering Committee, which includes the Ministry of Finance, should review and approve responses to audit queries from the Auditor General.”

However, both Committees did not state whether any pertinent requirements under domestic laws like a joint resolution being signed to that effect. It is known that the approval, according to Tweah, was given verbally.

Tweah, during an appearance on Spoon TV on May 24,  noted that he received a nod of approval from some of Liberia’s development partners to divert US$25 million of US$50 million collected to pay the salaries of civil servants.  The now controversial declaration, which the Minister has justified, is found to be in violation of chapter 2.2 of the Act establishing the National Road Fund.

“When you are faced with a crisis of that nature, you begin to look for ways to solve the crisis. We had a conversation with legislative leaders and development partners,” the Daily Observer quoted the Minister as having said.  “The German Ambassador [then] said it was not bad to use US$6-7 million, but it should be a one-off thing. In 2019/2020, there was re-appropriation by the National Legislature.

“Technically, if there should be an issue, it’s on the US$7 million [that we used]. It is the government’s money and when the government faces challenges, it can decide on how to solve them.”

The decision to use the funds, according to  Tweah, was carried out in consultation with the National Road Fund Steering Committee, which then consulted with the leadership of the Legislature and got approval through a meeting involving development partners.

“We have the minutes and all records to show that we did not act in isolation or against the law.  There was no written communication but there are records of the meeting held to approve the use of the money,” he said. “Fifteen development partners were in the meeting with us. There are notes and minutes to all the discussions and they are public documents.”

Tweah noted that the US$7 million taken from the road fund will not be refunded because “it is not a debt.

Major bilateral partners, the International Monetary Fund, European Union, and the World Bank, have acknowledged that they were and formed part of the discussion as claimed by Tweah.  The IMF, World Bank, and EU said their consent was meant to be a one-time measure with approval from the relevant authorities, vis-à-vis the Legislature.

“Please be advised that the Government discussed the issue with the World Bank and three other donors (Germany, the UK, and the EU),” a joint statement from the EU and World Bank revealed.  “It was done in the context of the Liberia South-Eastern Corridor Road Asset Management Project (SECRAMP), co-financed by the Government of Liberia using the NRF, the World Bank’s resources, the Liberia Reconstruction Trust Fund (LRTF) to which the three donors contribute, and the private sector.”

While the statement did not indicate how much was agreed upon to be used by the government, the World Bank and the EU stated that they advised the relevant authorities to consult in the framework of legality.

“As a general rule, in its work with all member countries, the World Bank/EU defers to the country authorities on decisions of national interest and their legality.”

The IMF, also acknowledged that it was in the know and gave its acquiescence to the deal.

“The government discussed the transfer of the US$7 million from the Road Fund to the FY 2019/2020 budget with development partners, including the IMF,” Aidar Abdychev, IMF’s Resident Representative said in a statement.  “We note that the transfer was included in the 2019/2020 budget Act approved by the Legislature, and we defer to the authorities and Legislature to follow the pertinent requirements under domestic laws for effecting such transfers.”

Meanwhile, the Plenary of the Liberian Senate has unanimously endorsed its Public Accounts Committee’s report, including the recommendations which, among other things, noted that any future audit of the Road fund should fully capture the final budgetary appropriation made by the Legislature to the Road fund Authority.