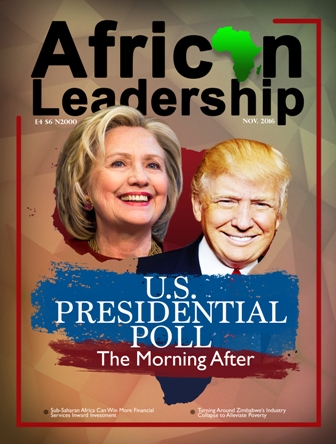 By Kingsley Okeke and Ehis Ayere

It’s been all anger, resentment, divisive rhetoric, tears and more tears, in what analysts have described as the fiercest campaigns in United States history. By the time the election is over, will there still be a United States of America? For a country whose pride is anchored on the cherished values of freedom and liberty, the drift from decency to divisive rhetoric leaves very little to be desired. In fact, this election have held the world in shock, with the critical question, how could this great nation — a beacon of liberty, and the West’s great protector — have become a theatre of absurdities? Where popular presidential candidates, jabber about banning Muslims, or casually propose “carpet bombing” Middle Eastern population centres?

The America we have known Vs. The America we see today
But this side of America that the world is seeing today — of naked religious bigotry, of race paranoia, of curdled nostalgia for mythologized “greatness” — is not a face we appreciate. And once the voting is done on November 8, we hope the country can quickly rise to the occasion and commence the healing process. Make no mistake; every presidential contest leaves scars, especially as the margin of victory has become ever thinner in recent years. The 2000 election, after all, took weeks to decide. Still, the wounds seem deeper this year. If Donald Trump loses, what happens to his supporters, many of them angry white men who already believe they have been left behind? And if Hillary Clinton loses, what happens to her supporters, including many frustrated minorities who feel under assault and women who had hoped to break a huge glass ceiling?

Elsewhere these developments can be excused, but not with America. Reason? The country has taken upon itself the role of policing the rest of the world. And as is with leadership, it comes with a very heavy burden. The burden to self-regulate at all times.

A renowned U.S. based Newspaper, U.S. Today in its analysis of things to be done urgently to inspire a national healing process in its article, titled: Healing America, Reuniting a Divided Nation – compared the elections to The United Kingdom’s 52%-to-48% vote on June 23 to exit the European Union, which ripped the nation apart. The Newspaper, presented two views on how the United States can heal the fractured nation, drawing from two opposing views to the United Kingdom’s Brexit Polls, as thus:
Views from – Iain Duncan Smith, who was leader of the Conservative Party from 2001 to 2003, and served in Prime Minister David Cameron’s cabinet as Secretary of State for Work and Pensions from 2010 to 2016:

“The vote to leave the European Union was a great exercise in democracy. It doesn’t do any harm to those who got used to running things to be kicked in the pants and told ‘not this time.’ Those who voted to remain in the EU have been appalled by the idea that the decision was taken by people that they don’t ever see or speak to, in places they don’t ever go to, and they universally refer to them as too old, too poor, too stupid.

“What the referendum exposed is that post-2008 — after the financial crisis — there were many issues that got swept under the carpet and still had not been dealt with: People in lower-income groups whose wages have not risen and in some cases have fallen. Migration from countries in Eastern Europe driving wages down and damaging lives and communities. There’s whole groups in society who feel that the people who got them into the mess never really faced up to it or paid a penance. The referendum exposed the perception that we’re all in this together. Some people got away with it.

“I think what you’re seeing in the United States with Donald Trump and Hillary Clinton is a similar process. Because the referendum was such an important vote, people got very attached to the outcome. They’ll move on. Things will settle. They already have. There are some still determined to put a stop to things but amid the general public there is recognition that a decision was made and now we need to get on with it.

“There is a more important issue that has come out of this, and that was not so apparent before: We need to do something about the level of inequality in this country. This is not about socialism or communism but about making a kind of capitalism that also works for people at the bottom end of society.” Smith is still a Member of Parliament.

Views from – Nigel Farage, who is the former leader of the United Kingdom Independence Party, an anti-immigration political group that backed Brexit:
“After every election, whether it’s a general election or a referendum, there is always going to potentially be a bit of a schism in society. What we’re finding is that a lot of the ‘Remain’ voters now accept the result and want the government to make the best job of it. I think the healing process has begun.

Brexit leader Farage has ‘lessons’ for Trump, GOP
“In some ways the election in the United Sates is more divisive than our referendum and the differences are more stark. But the ‘project fear’ that we saw used against Brexit is now exactly the same tool that is being used against Donald Trump. If Trump were to win, it would be for him to disprove the doubters by showing that he’s not the kind of guy that would lead the U.S. into ridiculous foreign wars and that he has a genuine agenda that will put the interests of the American people first. He will have to do that in the first 100 days and if he does that then there will be a consensus behind the fact that he won a democratic election.

“In the U.K., we were told that Brexit would mean the economy would fall off a cliff, that every single sector would crash and burn. Instead, what we’ve seen this past summer is the best season for British hotels and restaurants for 20 years. I would suggest that’s pretty good data to show that ordinary people are not panicking about this. Of course there are things to sort, the relationship with the European Union and the rest of the world. There will be ups and downs. But the key issue is this: Is there anything to be scared of? No, not really.

“As Abraham Lincoln said: ‘You can’t please all the people all the time’, and there are some people who would have been irreconcilable to the result whichever way it went. But now a very significant chunk of ‘Remain’ voters are accepting the situation, are saying it was a democratic vote, are not asking for a second referendum and are encouraged by the early signs of the economic benefits.”

The newspaper, maintained that it pitted regions, communities and even family members against one another. It also created a sharp generational divide between young adults who strongly favoured remaining in the EU and seniors who voted overwhelmingly to leave.

Those who voted against Brexit believed the alliance would ensure stability and growth for the U.K.’s economy, protect decades of social justice and welfare reform, and promote British interests on a range of issues from security to trade to influence on the world stage.For Africa, the continent may be more concerned about the policies of whoever emerges president of the United States. Observers are divided over who presents a better deal for the continent. The pro-Hilary movement appears to have gained traction in the continent and the numbers have continued to swell.

On Hilary for instance: Africa will see some of the policies of the President Barack Obama-administration on trade and military, among others, maintained. Beyond this, the Editor, Amazons Watch Magazine, a leading women development oriented Magazine, published by the Center for Economic and Leadership Development, Ms. Eruke Ojuederie maintains that a Hilary presidency would also mean triumph for the Africa woman. Ms. Eruke in her submission stated that, “Africa as you know copy a lot from the international community, especially the United States, therefore a Hilary win in this election, will ultimately serve as a shock therapy for some of our leaders who have continually maintained a hard-line on gender issues.” Ms. Eruke added that, “beyond the policies, some Africans are fascinated about firsts, and my interaction with some keen watchers of the election, reveals that, they would like to see a first in this election, with the emergence of the first female president of the United States.”

On Trump, Africa seems to be more concerned about his proposed immigration policies. For Africa’s 881, 300 immigrants to the United States, Mr. Trump’s policy on immigration will dampen the chances of a large number of Africans who are constantly in pursuit of happiness in the United States. But on the long term, it also signals well for Africa. With Africa poised as the next frontier, the future of global trade, if African governments continue to foster democratic governance and the enabling environment for business to thrive, most of these migrants who are graduated and skilled will find jobs in economic boom that growth that will elicit, contributing to the development of their motherland. It all balls down to the Africa’s government’s commitment to expedite the necessary stimulating start-up ecosystems and policies to favour small and medium scale enterprises to create jobs for the continent’s teeming youths, and spur growth in the economy.

The Republican Presidential Candidate is also of the view that the United States’ involvement in the internal affairs of some countries has rather elicited crisis, chaos and civil conflicts. Egypt and Libya are very good examples of African countries that are in crisis as a result of the U.S involvement and support for rebels to overthrow Colonel Moamar Gaddafi and Hosni Mubarak, respective leaders of Libya and Egypt.

This has been Trump’s major weapon against his opponent. Hear Trump, “we went from mistakes in Iraq to Egypt to Libya, to President Obama’s line in the sand in Syria. Each of these actions has helped to throw the region into chaos, and gave ISIS the space it needs to grow and prosper…We tore up what institutions they had and then were surprised at what we unleashed. Civil war, religious fanaticism; thousands of American lives, and many trillions of dollars, were lost as a result. Trump is saying the United States is “getting out of the nation-building business, and instead focusing on creating stability in the world.” That is to say, there is will little of no involvement of the United States in the internal affairs of countries around the world. This is includes perhaps an end to U.S. foreign military financing. According to reports, America spent U.S. $5.9 billion in foreign military financing in 2014 of which Egypt received $1.3billion.

Whichever way the election goes, a United States of America would be more beneficial to the African continent. Though this elections have questioned the country’s democratic maturity – given the invectives coming from both campaigns of the leading contenders, which are often downright offensive; America still has an opportunity to make things right.

One thing however is clear, this election has exposed the country’s often hidden fault lines and shows that politics everywhere may be the same after all. For a leading candidate, Donald Trump to have intensified his call to members of the Republicans to discountenance any result that those not favour his party at the polls is quite disturbing.

What happens next, will determine America’s future and that of the globally community – whose future is intrinsically woven around the progress of the United States of America.