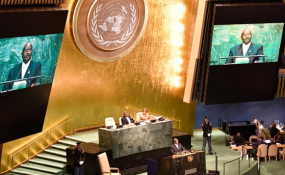 President Museveni has spoken highly of Uganda’s policies that empower the girl-child and push women’s progress.

Speaking at a high-level event on the side-lines of the 71st Session of the United Nations General Assembly, the President cited several policies his government has put in place including universal education at primary and secondary school levels which have made a difference to women and girls.

President Museveni who was accompanied by the First Lady and minister of Education and Sports, Ms Janet Kataha Museveni and their daughter Natasha Karugire, also emphasised education and rural transformation as key to empower the girl-child and pushing women’s progress for a better society.

The President said marginalising girls in the field of education would lead to unbalanced growth. “One of the important guiding principles of the NRM Government in Uganda is zero tolerance to discrimination against our women and girls in policy implementation and service delivery,” the President said.

President Museveni added that Uganda has embraced the principles of sustainable development as stipulated in the 2030 Agenda.

“We have localised the agenda in our National Planning Frameworks. We have already demonstrated leadership in aligning the gender equality commitments in the SDGs in our Party Manifesto, the National Vision, the National Development Plan, our Sectoral Plans and legislated it in our Public Finance Management Act, 2015,” he said.

The event co-funded by the Bill and Melinda Gates Foundation is a five-year programme that will invest much-needed resources and expertise, focusing on 12 pathfinder countries, to generate, prioritises and uses gender data.

Uganda’s population currently estimated at 36.6m is predominantly rural with only 15 per cent living in the urban areas. Women constitute 51.2 per cent of the population with a sex ratio of 95 males per 100 females.

“Without gender data, there is no credible path to achieving the SDGs. Right now, we do not have data to monitor 80 per cent of the indicators for SDG 5, on gender equality,” UN Women Executive Director, Phumzile Mlambo-Ngcuka said.

Melinda Gates, co-chair of the Bill and Melinda Gates Foundation, said the gender gap cannot be closed without closing the gender data. Gender data is foundational to all this work.

We can’t make good decisions without good data,” she said.