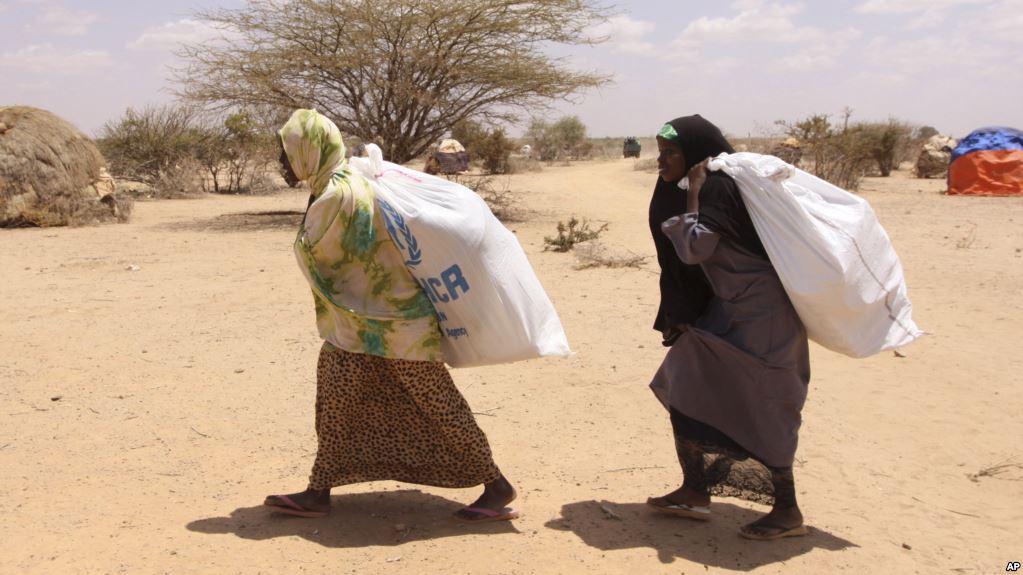 U.N. aid agencies are appealing to international donors to provide money to scale up lifesaving operations in drought-stricken Ethiopia and Somalia, where millions of hungry people are at risk of death and illness.

Five years after a devastating 2011 famine killed nearly 260,000 people in Somalia, famine again is stalking that country. The worst-affected areas are in northern Puntland and Somaliland, where dozens of drought-related deaths and many illnesses already are being reported.

“On Sunday, we received reports of 38 deaths due to drought-linked reasons in the Bakool region of south-central Somalia,” said Leo Dobbs, spokesman for the U.N. refugee agency. “Medical cases include people with acute malnutrition — especially children — watery diarrhea and cholera. These problems are likely to grow without substantial aid.”

The United Nations estimates that half of Somalia’s population, 6.2 million people, is threatened by the drought. The U.N. Children’s Fund said children were the most vulnerable.

Christiane Boulierac, a UNICEF spokesman, said the number of children suffering from severe acute malnutrition “is expected to rise to 270,000 in the next few months.”

The UNHCR said thousands of people were leaving their homes and heading for urban areas, including the Somali capital, Mogadishu, because of the drought, rising food prices and dry weather forecasts — all problems compounded by continuing warfare.

Dobbs told VOA the Somali government was taking this situation very seriously, and that this was a very personal matter for President Mohamed Abdullahi Mohamed, who was Somalia’s prime minister during the 2011 famine disaster.

The president wants to make sure that scenes that marked those days are not repeated — scenes of “people walking for days and days and arriving in dreadful physical shape, and where children were suffering from acute malnutrition. He wants to avoid that certainly in areas where there is complete control,” the refugee agency spokesman said.

UNHCR has begun helping displaced people in the worst-affected areas, Dobbs said, but “swift and substantial action and adequate funding are becoming urgently needed to avoid famine and a repeat of 2011.”

The U.N. agency urgently needs $825 million to carry out humanitarian operations until June, he said.

On a related issue, the United Nations released $18.5 million from its global emergency fund in response to a new catastrophic drought in Ethiopia.

Jens Laerke of the U.N. Office for the Coordination of Humanitarian Affairs told VOA this response was “triggered by the very rapidly deteriorating situation we have in Ethiopia, and in particular in the Somali region, where the pastoralists were extremely vulnerable to climatic changes and were in very dire condition.”

Laerke said the emergency funds could help more than 785,000 people suffering from hunger, malnutrition and severe water shortages. Thousands of farmers who raise livestock in the Somali region already have been forced to relocate their herds in search of water and pasture.

The current drought hit Ethiopia before the country had a chance to recover from the effects of a devastating El Nino-induced drought in 2015-16. That disaster left more than 10 million people in urgent need of aid last year.

Bettina Luescher, spokeswoman for the World Food Program, said the Ethiopian government and partners helped save countless lives and averted a humanitarian catastrophe.

“So the good news is that the numbers of people that this year will need help with food assistance is down from last year,” she said. “This year, 5.6 million people will need assistance.”

WFP said it needed $268 million to provide food aid for the drought victims through July. The United Nations has put the cost of its humanitarian operation for this year at $948 million.