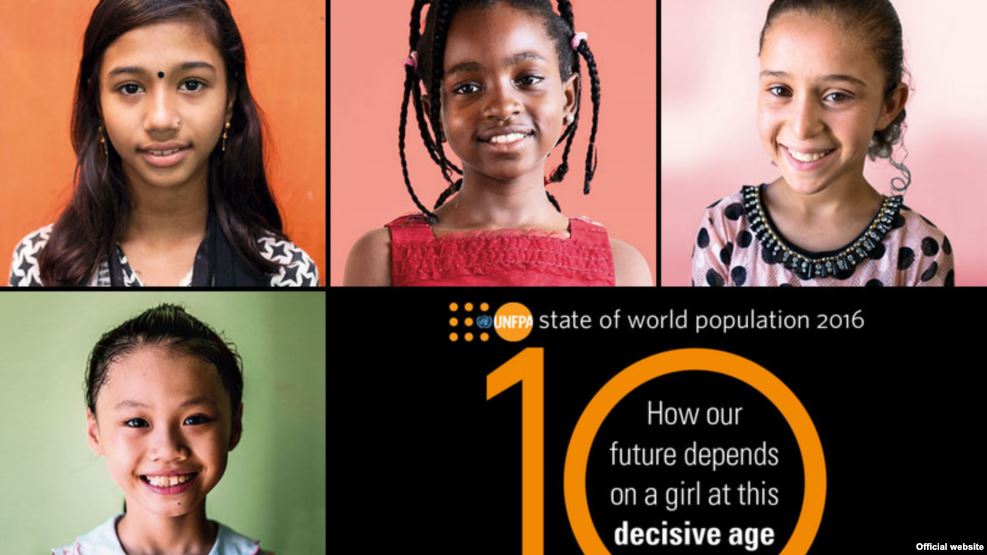 A new United Nations report argues that investing in the education, health and well-being of 10-year-old girls will pay huge economic and developmental dividends for societies worldwide.

Globally, boys tend to be favoured over girls. This is particularly true in the developing world where data show discrimination against girls deprives them of an education and makes them vulnerable to harmful practices.

The newly released State of World Population 2016 report finds more than half of the world’s 65 million 10-year-old girls live in the 48 countries with the worst gender inequality. It says these girls are less likely than boys to get an education, and many are subject to forced marriage, child labor, and female genital mutilation.

The director of the U.N. Population Fund’s Program Division, Ramiz Alakbarov, says 10 is a pivotal age for girls everywhere, as puberty approaches. He says a girl who goes through puberty is seen as a commodity that may be bought, sold or traded.

“For millions of girls, the arrival of puberty marks the beginning of a lifetime of poverty, powerlessness, and missed opportunities. Every day, the doors for the future of these girls are closed because their lives are being stopped from developing in the natural way and they are taken into a different direction,” he said.

Alakbarov told VOA half of the world’s 10-year-old girls live in the populous Asian-Pacific region, followed by sub-Saharan Africa. He said societies in both these regions lose out by pulling girls out of school and expecting them to bear children at an early age.

“India alone loses $56 billion a year in potential earnings because of adolescent pregnancy, high secondary school dropout rate and joblessness among young women… In sub-Saharan Africa, we have 55 percent of the world’s out-of-school children and 52 percent of out-of-school adolescents. I would like to mention another fact that eliminating child marriage in Niger alone could bring a total economic benefit and development benefit estimated at $25 billion from 2014 to 2030,” Alakbarov said.

The U.N. report says developing countries that allow their girls to complete their secondary education will earn an economic dividend of $21 billion every year.