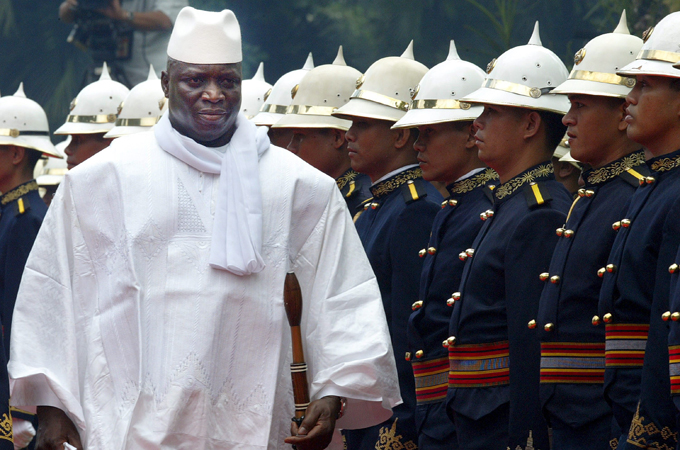 Gambian President Yahya Jammeh will face a rare challenge from a revitalised and united opposition in an election on Thursday as he seeks to extend his 22-year grip on power in the tiny West African nation.

Jammeh, 51, seized power as a young army officer in a 1994 coup and has maintained his control over Gambia in four subsequent elections despite growing international concern over his government’s deteriorating human rights record.

Election observers have questioned the credibility of past polls. Regional bloc ECOWAS boycotted the last election in 2011, claiming the process was not free or fair and have also stayed away from this week’s poll.

The European Union said this month that it had been refused access to monitor.

In the final days of campaigning, a grinning Jammeh stared out from the large billboards positioned every few hundred metres along the main roads leading into Banjul, the capital of the nation of 1.8 million people.

“I am the best president that Gambians will ever get,” Jammeh, who once said he would rule his country for “a billion years”, said on Tuesday. “My presidency and power are in the hands of Allah and only Allah can take it from me.”

Long known for his eccentricities, including a claim to have invented a cure for AIDS and a snap decision last year to declare Gambia an Islamic republic, international attention has increasingly focused on the repressive nature of his rule.

Jammeh has rejected outside criticism and last month announced Gambia’s withdrawal from the International Criminal Court, a body he says is biased against Africans and which his spokesman dubbed the “International Caucasian Court”.

This week’s poll comes at the end of a turbulent year that has given hope to opposition supporters that change may be on the horizon.

In April, small protests in Banjul calling for electoral reform led to dozens of arrests, including that of the leader of the main UDP opposition party Ousainu Darboe.

Two UDP members have since died in custody while others remain in jail, but the almost unheard of act of defiance has helped galvanise Jammeh’s opponents.

Eight opposition parties have rallied behind businessman Adama Barrow, calling for human rights and justice reforms and a revamping of a stuttering economy that has made Gambians more likely than any other Africans to migrate illegally to Europe.

Opposition rallies have drawn large crowds in the last two weeks of campaigning. Thousands came out to cheer Barrow’s motorcade on Sunday, banging drums as he passed.

“My chances are high to beat the incumbent president Jammeh with a landslide victory. A new Gambia will be born December first,” he told reporters on Tuesday. He has promised to rule only for a three-year transition period.

Still, experts question whether victory is even possible given Jammeh’s tight control of state resources, including the military and the police, and his reluctance to relinquish power.

A third candidate, Mamma Kandeh – a former Jammeh ally and member of parliament who has since formed his own political party – could also drain votes from the opposition under Gambia’s single-round election system.

“The question is probably not if he will win but by how much and what Jammeh will do with that message for his next mandate,” said one Western diplomat who follows events in Gambia.

“He has already said that he will not accept the result if he loses and it’s hard to see who would challenge that.”