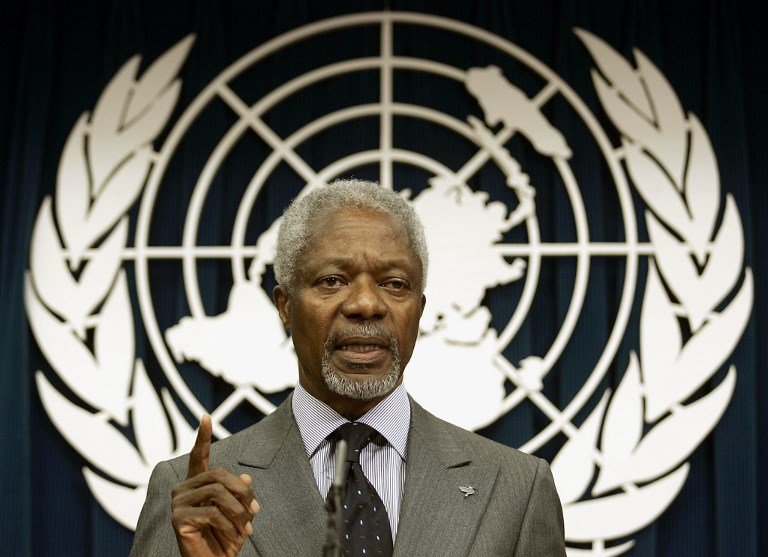 There was an outpouring of condolences from leaders around the world on Saturday after the death of former United Nations Secretary-General and Nobel Peace Prize laureate Kofi Annan.
Here are some of the tributes:

President Nana Akufo-Addo declared a week of mourning, saying the national flag will fly at half-mast at home and in the country’s diplomatic missions around the world in honour of “one of our greatest compatriots”.

“He brought considerable renown to our country by this position and through his conduct and comportment in the global arena.

“He was an ardent believer in the capacity of the Ghanaian to chart his or her own course onto the path of progress and prosperity.”

Both key figures in the deadly turmoil that followed Kenya’s 2008 election paid tribute to Annan, who helped mediate an end to the violence.

Former president Mwai Kibaki said Annan “will be remembered for mediating for the return of peace in Kenya”.

Opposition leader Raila Odinga hailed “what became known as ‘the Annan Doctrine’ in which he made it clear that the need to respect sovereignty cannot be used as a shield by governments to brutalise their own citizens and that the international community has a right to intervene”.

President Cyril Ramaphosa praised Annan as a “great leader and diplomat extraordinaire” who had advanced the African agenda within the UN and had “flown the flag for peace” around the world.

“A rare breed of diplomat; soft-spoken but unshakeably firm,” tweeted Nelson Chamisa, the main opposition leader in Zimbabwe – where Annan visited days before the July election.

“He had great love for world peace & democracy. A believer in Zimbabwe & its people. Go well son of Africa, Champion of the world!”

President Vladimir Putin said he was “fortunate” to have been in personal contact with Annan while he lead the UN.

“I sincerely admired his wisdom and courage, his ability to make informed decisions even in the most complex, critical situations. His memory will live forever in the hearts of Russians.”