African Leadership Magazine
Home Women in leadership Gender Zimbabwe: Women Take to the Streets to Demand Free Education for their... 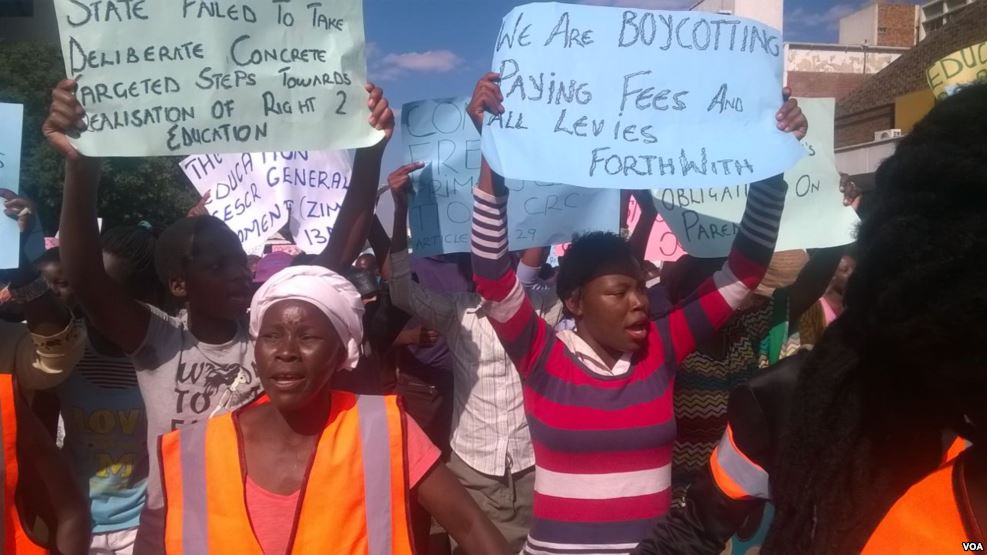 Thousands of women took to the streets of Bulawayo in Zimbabwe on Thursday to demand free education for their children as protests against the government mount across the country.

The protest dubbed #BoycottSchoolFees was organised by Women of Zimbabwe Arise (WOZA) who presented a petition to the resident minister ahead of the new school term early next month.

The protest, involving about 2,000 women, follows about a dozen protests in the past two months over a series of issues, including the planned introduction of controversial bond notes to curb a long-running cash shortage crisis.

“We want government to honour its constitutional obligation to provide education for all,” Jennie Williams, WOZA coordinator, told the Thomson Reuters Foundation.

According to parent associations, thousands of children have been thrown out of classes around the country for failing to pay tuition at a time when millions are without jobs in the country.

Labour unions estimate that up to 90 percent of Zimbabwe’s 14 million people do not have jobs but there is no clear data on the jobless rate with so many Zimbabweans working in the informal sector.

UNICEF said in a recent report that regular monitoring continued to show a downward trend in terms of school attendance but it did not have exact figures on numbers in classrooms.

However the Zimbabwe Vulnerability Committee reported last month that up to 15 percent of rural school children were out of school because they cannot afford tuition fees.

The march came as pressure mounts against 92-year-old President Robert Mugabe amid the continuing economic crisis.

Police have arrested more than 100 protesters across the country over the past two months during which Zimbabwe has witnessed almost weekly protests, some which have ended in clashes with police, against economic hardship.

According to Williams, none of the women protesters were arrested in Thursday’s march which lasted more than an hour with women carrying petitions and flyers to hand out to onlookers.