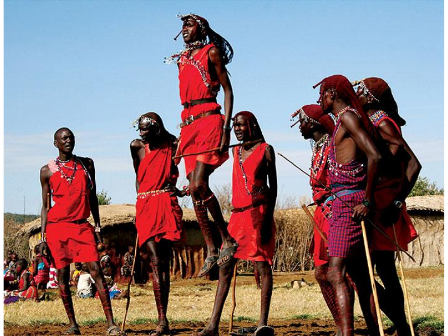 The semi-nomadic Maasai people who pride themselves as the authentic people of Kenya are predominantly located in Kenya and northern Tanzania of East Africa. They reside along the border of the two countries and are considered to be part of the Nilotic family of African tribal groups. It is estimated that about 1 million Maasai people live in Kenya and Tanzania. Maasais speak Maa, a Nilotic ethnic language from their origin in the Nile region of North Africa. In spite of the growth of civilization and modernism, they have laudably managed to sustain some beautiful aspects of their culture which make them one of East Africa’s most internationally famous attractions. Here are some 11 beautiful aspects about the Maasai people:

The effects of modern civilization, education and western influence have not completely spared this unique and interesting tribe. Some of the Maasai tribe’s deep-rooted culture is slowly fading away. Maasai children now have access to education and some Maasai have moved from their homeland to urban areas where they have secured jobs, however, the Maasai’s authentic and intriguing culture is a tourist attraction on its own.