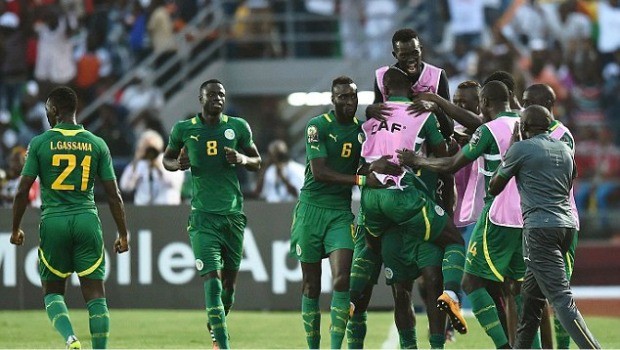 The long-awaited and controversial 2015 Africa Cup of Nations is underway, and football fans around the world are tuning in to watch. With just the first matches of the group stages played to date, more exciting play is yet come. Here are 12 memorable events so far at 2015 Africa Cup Of Nations. –

Just 16 minutes into the opening match of the tournament, host nation Equatorial Guinea’s Emilio Nsue scored the first goal of AFCON 2015, sending the stadium into a frenzy. He later scored a second goal in the 74th minute that would have won Equatorial Guinea the match, but it was overturned by an offside flag – a contentious call at best. Equatorial Guinea ended up with a 1-1 draw against the Republic of Congo.

Gervinho was sent off for Côte d’Ivoire

Without Didier Drogba, the pressure was on Côte d’Ivoire’s big stars for AFCON 2015 – namely Yaya Touré, Kolo Touré, Cheick Tioté, Wilfried Bony, and Gervinho. However, Gervinho was shown a red card and sent off just before the hour mark for violent conduct against Naby Keita. Guinea’s Mohamed Yattara was able to score a volley at the 36-minute mark, and the Ivoirians didn’t manage to equalize until the 72nd minute, ending the match in a disappointing draw.

Cameroon put on a luke-warm performance

With Cameroon coming into the tournament as one of the favorites, expectations were high for its opening match against Mali. Les Lion Indomptables were barely able to escape with a 1-1 draw, with defender Ambroise Oyongo’s equalizer in the 84th minute. The team is playing for the first time without Samuel Eto’o — who recently retired from international play — and may have more difficulty than expected adjusting to the new team dynamic.

As Morocco pulled out of hosting the tournament in November, Equatorial Guinea had just two months to prepare for the tournament. Reports have surfaced that some of the teams’ hotels lack running water or reliable electricity, and many of the pitches are poor quality. Players often have to replace ripped-up chunks of turf mid-game. However, as the issues are the same for all squads, most teams and players have been understanding about the host country’s difficulties. One exception: DRC head coach, Claude Le Roy (above), has been dubbed “Le Whinge” for his consistent complaining about the hotel facilities in Equatorial Guinea.

Zambia disappointed those looking for another miracle

The 2012 AFCON champions weren’t necessarily the favorites to win in 2015, but many had hopes that the Zambian team could impress again this year, especially in light of eight of its players returning from the miracle squad. However, they barely managed to eke out a draw against the DRC and fans complained that the team looked messy and unorganized.

Pierre-Emerick Aubameyang pulls through for Gabon

In Gabon’s 2-0 victory over Burkina Faso, Pierre-Emerick demonstrated exactly why he’s the teams captain, and was a finalist for the 2014 African Footballer of the Year competition. His easy goal in the 19th minute was followed by a truly unique goal celebration, and he sealed the victory in the 72nd minute with a flawless cross to Malick Evouna, who headed it in the net.

The DRC team was fined by tournament officials for its failure to adhere to kit rules – the writing on team uniforms was very small, allegedly from a printing error. Regardless, the team will be fined for noncompliance with tournament regulations.

Cape Verde proves to be a frustration for Tunisia

Tunisia was one of the strongest teams going into the tournament, but keenly felt the loss of strikers Fakhreddine Ben Youssef and Saber Khalifa, who suffered muscle injuries during last week’s warm-up friendly. Cape Verde, on the other hand, made a name for itself as a giant slayer when it made it to the quarterfinals in 2013, and refused to back down to the Tunisians in their opening match, hitting an equalizing shot just seven minutes after Tunisia’s first goal. The match ended in a 1-1 draw.

South Africa made it clear they are playing for Senzo Meyiwa

South Africa enters the tournament without former Capt. Senzo Meyiwa, who died during an armed robbery several months ago. Head coach Shakes Mashaba said, “It’s unfortunate what has happened…it was beyond our control so we say to them they must stay focused, stay put, and cheer the team as they did when the late Senzo was with us.”

Algeria demonstrated why it is one of the tournament favorites

Playing from behind, Algeria went on to beat South Africa 3-1, demonstrating its team cohesiveness and deep talent. South Africa took the lead in the 51st minute with a penalty kick, but Algeria equalized 15 minutes later, and went on to score twice more in short order to win the match.

In the final minute of stoppage time in their match against Ghana, Senegal’s Moussa Sow netted a dramatic shot with the last kick of the game and earned his team the 2-1 victory. The shot shocked Ghana. Considered one of the favorites for the tournament, Ghana will now face an uphill battle to reach the knock-out stages of the tournament. Ghana was also missing its skipper, Asamoah Gyan, who was admitted to the hospital before the match with mild malaria, though he has since been discharged.