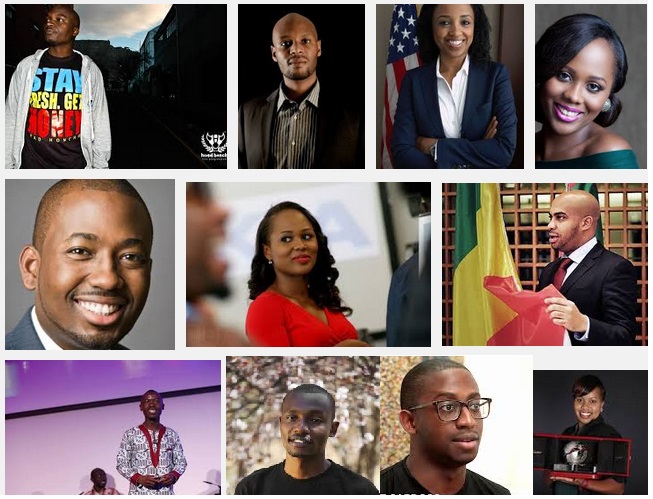 There has never been a more inspired generation of young Africans. These builders, innovators and risk takers are fervent in their resolve to transform the continent. They are solving critical socio-economic problems, exporting African culture to the world, creating job opportunities for Africans, re-telling Africa’s stories, and writing the future.

Meet the 30 prodigies transforming Africa as we speak.

Founder, Madlyn Cazalis
After working in financial services in France, first as an analyst at French investment bank Quilvest Group and as an associate at Findercord in Paris, Christian Ngan returned home to Cameroon to start his own business in 2012. With $3,000 of his savings, he founded Madlyn Cazalis, an African hand-made bio cosmetic company that produces body oils, natural lotions, creams, scrubs, masks and soaps. Madlyn Cazalis products are sold and distributed across more than 30 chemist stores, beauty institutes and retail outlets in Cameroon and neighboring countries in Central Africa. The company does not reveal revenues but says it is profitable. Ngan, 30, is also founder of GoldskyPartners Advisory, a small financial advisory firm in Cameroon.

The 27 year-old Ethiopian entrepreneur is the founder of Feed Green Ethiopia Exports Company, an Addis Ababa-based outfit that produces and exports popular Ethiopian spice blends such as Shiro, Mitmita, Korarima and Berbere. Wolderufael founded the company in 2012 primarily to serve the needs of the Ethiopian diaspora in the United States and Europe, but as demand for Ethiopian spices increased significantly, Feed Green began exporting to new markets within Africa. The company employs only women.

Shah, a 26 year old Asian-Kenyan, is the founder of Kronex Chemicals Ltd, a fast-growing manufacturer of low-cost household cleaning products. Shah founded Kronex in January 2013 and the company has two products- a dishwashing liquid and a multi-purpose detergent, both of which are gaining market share amongst Kenya’s lower middle-class.

Patrick Ngowi, 29 is the founder of Helvetic Group, a company that pioneered the supply, installation and maintenance of solar systems in Tanzania’s Northern Circuit. Helvetic Solar Contractors continues to grow. Helvetic did more than $5 million in revenues in 2013 and KPMG East Africa recently valued the company at $15 million. Helvetic is also expanding into the South African region and Ngowi is gearing up to take the company to Dar es Salaam’s capital markets.

After dropping out from school in the United States, Heshan de Silva, 25, worked briefly for a tea exporting company owned by his parents before breaking out to start VenCap, a business that sold travel insurance bundled into long distance bus tickets. The company became profitable very quickly, grossing over $1 million in revenues within its first year and setting the pace for travel insurance for bus commuters in Kenya. He is now a venture capitalist and the founder of DSGVenCap, a company that makes seed investments in the tech, media, agribusiness and consumer industries in Kenya.
Julie Alexander Fourie, South African

At 26, Julie Alexander Fourie runs a company that employs 40 people and services more than 4,000 clients a month. Fourie is the founder of iFix, which repairs and services all Apple products and Samsung Smartphones. iFix has branches in Johannesburg, Cape Town and Durban. Fourie started the company in 2006 from his dorm room at the University of Stellenbosch, helping colleagues and friends repaid broken and faulty iPods and computers. Satisfied friends subsequently referred other Apple product owners in search of repairs and Fourie’s business took off.

Delle, 27 is a co-founder of Golden Palm Investments, a holding company that invests in early stage venture and growth financing across Africa with a strong bias for Real Estate, healthcare, agribusiness and technology. GPI has backed startups such as Solo Mobile in Nigeria, mPharma in Ghana and Zamsolar in Zambia. He is also the co-founder of cleanacwa, a non-profit working to provide access to clean water in Ghana’s underdeveloped regions. Sangu, who previously worked at Goldman Sachs, Morgan Stanley and Valiant Capital Partners, is currently an MBA candidate at Harvard.

Cardoso, 25, is the founder of the Nigerian operations of EasyTaxi, a taxi mobile App that was founded in Brazil in 2012 by German technology startup incubator, Rocket Internet GmBH. EasyTaxi serves to connect cab drivers and would-be passengers. Through the App, passengers can confirm their pickup point and then order a cab at the click of a button. EasyTaxi sends the passenger a confirmation of the name and phone number of your driver and gives passengers the option of tracking their driver and the vehicle in real-time. Before setting up EasyTaxi in Nigeria, Cardoso worked for PricewaterhouseCoopers and the Carlyle Group in New York.

Isaac Oboth, 24, is the founder and CEO of Media 256 LTD, a film and television production company in East Africa. Media 256 was founded in 2011 and has a client list that includes Coca Cola, UNDP, USAID, the Ethiopian Commodities Exchange, Marie Stopes International, the African Leadership Network, and the African Leadership Academy. The company says it is profitable and employs 7 full-time videographers and editors. Isaac is also an Anzisha Prize Fellow, a pan-African award that celebrates innovative young African entrepreneurs.
Barclay Paul, Kenyan

The 22 year-old Kenyan is the founder of Impact Africa Industries, a company that produces low cost sanitary pads for poor women in informal settlements Kenya three years ago and he now sells the pads to as far as Uganda and South Sudan. The company is located in Kitale, a small town in Western Kenya and has 23 employees, 15 of whom are women who help in production and distribution of the sanitary pads. Paul was an Anzisha Prize Fellow in 2013.

Akumani, 30 is a co-founder of ClaimSync, an end-to-end claims processing software that enables hospitals, clinics and other healthcare facilities all over the world to automate patients’ medical records and to process records electronically. Claimsync’s solution allows these healthcare providers to easily prepare medical claims and send electronically to health insurance companies. In 2013 ClaimSync was the sole African company to participate in the high-profile, IBM, Novartis, GlaxoSmithKline backed Accelerator program HealthXL in Dublin. ClaimSync was recently acquired by GenKey, a Dutch-based biometrics company.
Jonathan Liebmann, South African

The 29 year-old South African visionary is the Managing Director of Propertuity, a South African Real Estate development company and the brains behind the construction of the Maboneng Precinct, a thriving cultural district in the east side of Johannesburg’s CBD. Once a neglected and deteriorating neighborhood housing abandoned industrial complexes, Liebmann transformed Maboneng into a vibrant urban mixed-use community complete with Art galleries, artist studios, retail spaces, offices and artist studios.

The 30 year-old Harvard MBA grad recently stepped down as co-founder of Jumia Nigeria, the country’s largest online retailer. Kehinde founded Kasuwa, a Nigerian online retailer in 2012. Within days of its founding, Kasuwa received seed funding from German online startup incubator and the company’s name was changed to Jumia. Kehinde resigned in January to start a logistics company.

Founder, Woothemes
Adii Pienaar, 28, is the founder of Woothemes, a company that designs and develops customizable commercial themes and plugins for WordPress. Adii built the business with a bootstrap budget, and the company today generates over $3 million in annual revenues from the sale of its themes. Woothemes also develops and sells themes for other content management systems, including Tumblr. Pienaar also runs PublicBeta, a service that allows successful entrepreneurs to transfer knowledge to new startups.

Founder, One Way Up Productions

Muthiga, 26, is the founder of Fatboy Animation, a Nairobi-based animation company that produces 3 and 2 dimensional animation for both film and commercial use. FatBoy Animations has produced several viral animated commercials for Kenyan blue chips like brands such as Safaricom, Telkom Orange, Barclays Bank and Jamii Telecommunications (JTL).

Muchemi, 29, is the founder of WebTribe Kenya, a leading IT company in Kenya with operations in online payment systems, web applications and network security. Webtribe’s flagship company, Jambopay provides e-payments services for e-commerce players as well as e-ticketing services and electronic cash disbursement services. Jambopay is a recipient of the Google Innovation Awards in Financial Services for 2013.

Kunmi, a 30 year-old Nigerian fashion entrepreneur is the founder of Minku Design, a company that makes leather bags for men and women by subtly blending Aso-oke fabric (a hand loomed cloth woven by Nigeria’s Yoruba people), into contemporary leather bag designs. Minku also makes Yoruba-themed leather purses and jewelry. All Minku Design’s products are hand-made at a workshop in Barcelona, Spain, but they are sold at high-end stores in Nigeria and on the company’s website.

27 year-old Mazen Helmy is the founder of The District, one of the first co-working spaces in Egypt and one of the few in the region. The District provides an inspiring workspace (sitting on a total area of almost 1000 square meters) for entrepreneurs and freelancers. Helmy founded the company in 2011.

The 22 year-old Egyptian entrepreneur is the founder of Mubser, a new assistive tool for blind people. Mubser, which will be launched officially in March 2014, is a wearable belt with a Bluetooth-connected headset that leverages RGB imaging and infrared dept data captured by a 3D depth camera that allows blind and visually impaired people to navigate around in a safe and easy way. The device recognizes object and obstacles such as staircases and chairs.

Mwale who is now 21 years old founded SkyDrop Enterprises, a rainwater filtration and bottling company which produces low-cost purified drinking water, milk and other dairy products in Kenya. In 2012, Mwale sold a 60% stake in Skydrop to an Israeli firm for $500,000. Next stop: Education. Last year Mwale founded Gigavia, an educational social networking website.

In 2010, Lorna Rutto, 28, founded Ecopost, a Kenyan company that collects consumer plastic waste such as polypropylene and polyethylene and converts them into durable, easy to use and environmentally friendly plastic lumber, an eco-friendly alternative to timber which is used to manufacture fencing posts.

Kimiti Wanjaria, 30, is a co-founder of Serene Valley Properties (SVP), a Real Estate development company in Nairobi that constructs and sells residential properties to Kenya’s ever-growing middle class. SVP is behind the development of Sigona Valley project, a $4 million gated residential community outside Nairobi.

Zang, a 26 year-old Cameroonian Engineer is the inventor of the Cardiopad, a touch screen medical tablet that enables heart examinations such as the electrocardiogram (ECG) to be performed at remote, rural locations while the results of the test are transferred wirelessly to specialists who can interpret them. The device spares African patients living in remote areas the trouble of having to travel to urban centers to seek medical examinations. Zang is the founder of Himore Medical Equipments, the company that owns the rights to the Cardiopad.