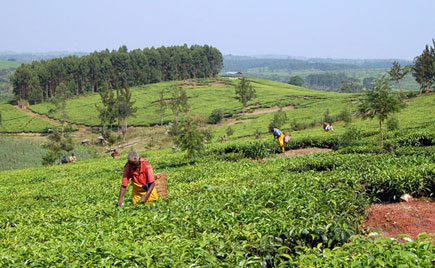 Five (5) East African countries have recorded a rise in both tea production and export volumes following the latest business report. These countries which include Burundi, Tanzania, Uganda, Kenya and Rwanda all recorded a 16% rise in exports at the Mombasa auction which was held on 28 and 29 May. This trade has contributed immensely to the economic growth of these regions. The East African Tea auction recorded the sale of more than 9.6million kilograms of tea. This was equivalent to the eight (8) million bags that was sold in 2017

The countries that were supposed to participate in this auction were ten but only the five Eastern states including Mozambique successfully participated. The other countries that opted out of the auction are: Madagascar, Malawi, Democratic Republic of Congo and Ethiopia.

Reacting to this economic growth, Mr. Ignatius Byarugaba who is the chief executive officer of Uganda Tea Development agency (UTDA) stated that the rise was as a result of increase in government’s free seedling distribution strategy. “We have seen many people grow tea and this is one of the reasons the volume in Uganda has increased”. He further stated that Uganda Tea Development Agency (UTDA) will move into direct exports with countries like Pakistan and United Kingdom. According to Mr. Byarugaba, UTDA also have direct export contact with Russia, Egypt and Iran which he believed are one the biggest buyers of Tea in the world.