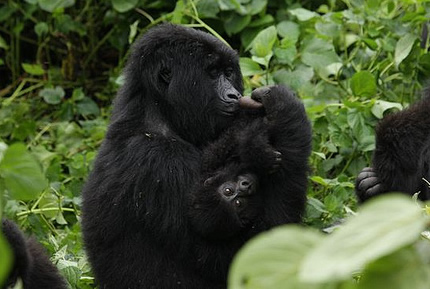 The conservation journey of Rwanda began decades ago and has since then continued to immensely progress. In a single adventure, tourists can reach volcanoes, lakes, rainforests, mist-shrouded mountains, the beautiful city of Kigali, and trek with the last remaining mountain gorillas. Due to the successive increase of tourism, Rwanda is becoming one of Africa’s leading business tourism destinations.

In 2016, a fourth national park was established – Gishwati-Mukura National Park, made up of two fragmented mountain forests that is home to the endangered chimpanzees and golden monkeys.

The magnificent mountain ranges of the most biodiverse jewel in Africa – Volcanoes National Park – was expanded by 27.8 hectare property adjacent to the park. It was donated to The Rwanda Development Board by the African Wildlife Foundation. Volcanoes National Park is Africa’s oldest park and is home to the last remaining critically endangered mountain gorillas.

And most recently, the legacy of Dian Fossey will live on as Ellen Degeneres established the The Dian Fossey Gorilla Fund to create a permanent home for an organization that’s worked to save the critically endangered mountain gorillas for 50 years. The campus will support the Rwandan government in serving as an important hub for the newly established Center for Excellence in Biodiversity Conservation and Natural Resource Management. This fund will help ensure the survival of one of the beloved mountain gorillas.

Rwanda is well known for its mountain gorillas and mountain gorilla tourism in Rwanda has long been viewed as a valuable conservation tool. In 2016, the once volatile Volcanoes National Park generated USD 16.4 million from tourists, employment, and infrastructure development. Rwanda’s annual gorilla naming ceremony – Kwita Izina – has named 22 baby gorillas and has attracted a number of international celebrities. In 2016, the event hosted a fundraising gala dinner that raised RWF25 million (USD $29,500).

With economic incentive comes organized conservation strategies. The mountain gorillas have experienced a steady population increase in the last three decades, making them the only great ape to be increasing in number. Their numbers are now hovering around 1,000. Gorilla trekking is the backbone of Rwanda’s tourism industry and with this positive hope for their future this is not only good news for the critically endangered mountain gorillas but is also good news for the industry.

Conservation is a prerequisite for sustainable and economic development in African countries. Rwanda gives back five percent of tourism revenues from protected areas into local communities. With the tourism revenues, more than 600 community projects have been delivered, such as health centers, access to clean water, schools, etc. While such measures has positioned Rwanda as a role model in conservation within Africa the future of the critically endangered mountain gorillas and preservation of these national parks remains fragile and depends on the continuation of focused conservation efforts.