Home Business & Economy A Continent Of Contrasts – Wealth In Africa 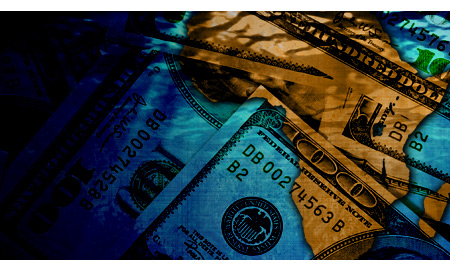 Despite the international media’s tendency to speak in sweeping statements about the landmass called Africa, it is as economically diverse as it is geographically and culturally varied.

The historical discourse about Africa, at least that which has emerged from colonial and so-called “Western” powers, has largely been of a homogenous, amorphous “dark continent”; a land of disease and famine, flies and relentless poverty. But while poverty and disease remain issues for many African countries, the continent is also home to powerful emerging economies, multinational corporations and one-eighth of the world’s burgeoning population. The global view of the continent is changing as its massive potential becomes apparent. Today, Africa is as easily defined by a more prudent use of our abundant resources – including gold, platinum, oil, copper, diamonds, natural gas, iron and human capital – as we are by the sadly widening gap between the poor and the superrich.

Absolute gross domestic product (GDP) figures and growth are important factors in measuring the relative wealth of countries. According to the World Bank’s Africa Pulse, some 25 percent of the countries in Africa, notably Sierra Leone, Niger, Ivory Coast, Liberia, Ethiopia, Burkina Faso and Rwanda, grew at 7 percent or higher in 2012. Furthermore, the publication found that economic growth remains strong – an estimated 4.7 percent – throughout the sub- Saharan region. If you exclude the area’s powerhouse, South Africa (the largest economy in sub-Saharan Africa), from the picture, the remaining countries show growth of 5.8 percent. This is remarkable, especially given that the developing countries together averaged 4.9 percent over the same period and that in 2013, global GDP growth is expected to hover around 2.4 percent. In fact, nine of the 15 countries with the highest rate of economic growth in the world are in Africa.

With economic growth rates slowing and birth rates way down in the developed world, global businesses will look to Africa more and more when seeking to expand. According to Mauritian newspaper, Le Mauricien, Africa’s roughly one billion people – almost 15 percent of the world’s population and growing – represent a potentially massive consumer market, particularly in the continent’s emerging middle-class countries. In 2012, The Economist reported that 60 million African households are now middle class, a number expected to grow to 100 million by 2015. Additionally, 60 percent of the world’s arable, uncultivated land is in Africa.

According to research produced by Africa investor (AI) and The Africa Group (TAG), Africa holds $1.671 trillion of potential wealth and additional production potential in six key sectors: agriculture, water, fisheries, forestry, tourism and human capital. These figures have enticed foreign direct investment (FDI) in Africa, which has more than doubled over the last decade according to Ernst & Young. Africa attracted 5.5 percent of global FDI projects in 2011, up from 4.5 percent in the previous year. Although the continent’s take remains a low proportion of the total, this is the highest slice of the global FDI pie that Africa has ever received.

The continent’s growth prospects aside, absolute poverty and an increasing Gini coefficient (a commonly used measure of inequality, representing the deviation in the distribution of income between the richest and poorest individuals) are very real barriers to growth and economic transformation. A Global Finance analysis shows that Liberia has one of the highest percentages of people living on less than $2 per day. Others on this list of dubious achievement include Malawi and Madagascar. The Global Finance data also show that in South Africa, Namibia and the Seychelles, the 10 percent of the population “at the top of the economic ladder control the highest share of national income compared to the rest of the world”.

Despite the bleak picture the inequality statistics paint, Africa’s “haves” are living it up, and the number of US-dollar millionaires and billionaires on the continent is rising. A report by UK-based consultancy, WealthInsights, titled ‘World City Millionaire Rankings 2013’, and released in May this year, shows that Johannesburg is the preferred home of African millionaires, followed by Cairo and Lagos. The report further reveals that, of African countries, the Ivory Coast and Ethiopia are expected to see their millionaire populations grow fastest. Ghana’s Accra is currently the fastest growing city. If trends hold, the number of millionaires within the city limits will rise from 800 in 2012 to 1,500 by 2020.

It is not surprising, then, that Accra also ranks as having the highest growth potential of sub-Saharan African cities, according to research produced by the University of South Africa (UNISA). The MasterCard African Cities Growth Index, released in January this year, aims to demonstrate the importance of cities in driving national and regional growth, and how they need to attract “inward investment” and manage their resources effectively while growing. This report also ranked Lusaka, Zambia, and Luanda, Angola as having medium-high growth potential.

The success of Africa’s elite is even more remarkable in light of two things: the relative expense of living in Africa and the systematic barriers to commerce that persist in so many African countries. At least in terms of ease of doing business, there is a silver lining. According to the World Bank, of the 50 economies making the most improvement in business regulation for domestic firms since 2005, 17 are in sub-Saharan Africa.

According to the 2013 Cost of Living Survey from US-based consulting firm, Mercer, Luanda in Angola is not only the most expensive city in Africa but the most expensive in the world. It must be noted that the Mercer report is compiled with international companies and their expatriate workers in mind, and as such weights housing highly in the calculations. Still, with a two-bed luxury apartment rental running to $6,500 per month and burger meals costing $20, it is safe to conclude that most anyone’s income would be stretched in Luanda. The only other African city in the world’s top 10 costliest is N’Djamena, Chad, sitting at fourth place.

Given the continent’s potential for exponential growth, both as a hungry market for regional and international goods and as a player in the global economy, Africa’s future wealth horizons are wide open. The key is to manage this growth effectively in order to create stable and more equal countries. If we achieve this goal, argue people as diverse as former South African president Thabo Mbeki and rock band U2’s Bono, we will be entering into the African century – one characterised by peace and prosperity.