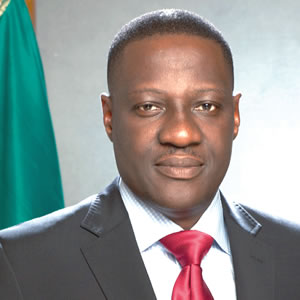 Abdulfatah Ahmed was Commissioner for Planning and Economic Development from 2003 when Dr. Bukola Saraki emerged Governor of Kwara State to 2010 when he resigned to contest for the governorship of the state. A close friend and political ally of Dr. Bukola Saraki, he shares with Sam Hart how his administration is building upon the legacy left behind by Bukola Saraki. Excerpts.

Kwara State has over the years emerged as one of the major agricultural hubs in Nigeria. What role would you say that the Bukola Sa.raki administration as governor of Kwara State played in this regard?

Agriculture as it were had always been a critical player in our economy. If you give it a retrospective review by for instance, looking at the pre-independence and post-independence era, you will see that not only was agriculture contributing substantially to the GDP then, it was also the highest contributor to the national revenue until when we began to earn money from crude oil exploration and exports. To that extent, that tells you that we had some strength but that strength was allowed to die. When the administration of Dr. Bukola Saraki came in in 2003, it was with a clear picture of what needed to be done. He knew that Kwara State had good and fertile soil and all nearly all year rainfall and most importantly, irrigation inlets from the River Niger. So what he did was to analyze our strengths. If you know what you are doing, you must approach your business strategically and the most important aspect of that strategy is looking at your strengths and juxtaposing them with your opportunities and weaknesses. The question then was where is the strength of the people? And agriculture was identified as the core strength of the people of Kwara State. A quick demographic analysis showed that we had close to 3 million people with over 70% of them living in rural environments and engaged traditionally in farming but unfortunately, largely at a subsistence level. The natural thing to do to improve the lives of people in Kwara State then became taking advantage of what they knew how to do best and that was what prompted Dr. Bukola Saraki to move agriculture, which had always been on a subsistent level to a commercial level. We needed to make sure that what we were doing was comparable to best practice anywhere but in Nigeria, we had little or no best practice to benchmark what we were doing against so fortuitously, the conceptualization of the agricultural revolution coincided with when the Zimbabwean farmers were displaced from their country and they were looking for sanctuaries so the then administration quickly invited 13 of them to come to Kwara State with capital intellect because that was what we felt was lacking to come and jumpstart commercial farming in Kwara State because obviously, the system they were using in Zimbabwe was quite profitable to necessitate their dislocation in the first place. Nobody scrambles for a failed project. It is only when you are succeeding that people want what you have. What we knew we were attracting was a new phase of commercial farming which was what we needed to get to the next level away from the subsistence farming our people were used to. They came in here and started commercial farming and I want to tell you today that it is a success story. During the last administration, we succeeded in setting up 13 commercial farms engaged in poultry, dairy and mixed cropping consortium. Each of these have moved their consortiums to appreciable levels under the value-chain concept. Do not forget that in the last administration, I had a key role to play in all these. I was Chairman of Shonga Farms and my principal role was to see how funding was going to be available to farmers who had come with capital intellect and yet we wanted the structure to be driven under a Public Private Partnership to ensure efficiency. Now going forward, we have seen the success of commercial farming, we have also seen the challenges of commercial farming so the question then becomes how do you move to the next level? The next level we identified was moving our farmers successfully from subsistent level to commercial level so we sat down and looked at the who set-up and identified value chain coordination as what needed to be done. In this administration, we have come up with what we call a model scheme which basically involves taking 10 farmers from each of the local government areas who will be trained and equipped to be the first model farmers to drive the rural commercial farming scheme largely relying on the experience we have learnt from Shonga Farms. These farmers have been compartmentalized into corporative groups and these groups have been linked to an agric-mall scheme which is a one-stop shop. The one-stop-shop allows each of these 10 farmers to access inputs i.e seeds, fertilizers, chemicals and farm preparation equipments. This enables them to jumpstart their businesses and most importantly, allows them to access funding. Each of these 10 farmers in each of the 16 local governments will now be change agents in their various locality because they will be clustered with other farmers who will serve as outgrowers. They have been put together to support 4 major crops i.e rice, maize, soya and cassava. These are the 4 crops we are starting with on this commercial agricultural scheme. The aspect of this whole scheme I am excited about is that these 4 crops have been tied to specific off-takers. The biggest challenge we had in time past was in being able to move the produce from our farms to the market for open purchase. This has been taken care of. The off-taker has been linked to the farmer under a clear memorandum of understanding which enables the farmer to know who will take what he produces from his farm and how he is going to get paid. It allows the off-taker to know who he is expecting maize or rice or soya or cassava from in what quantity and at what time. The banker that is funding the entire process knows when his money is going to be paid and knows that a system is in place to ensure his money is paid. This loop is what we have created and it is working wonderfully well. This is our own way of building on the legacy left for us by Senator Saraki.

While speaking with Senator Saraki, we asked him about the sustainability of the projects he initiated by succeeding administrations and he was of the opinion that it would be hard to differentiate between both of you as to the owner of the agricultural project because you drove the projects as Commissioner for Planning and Chairman of Shonga Farms. Your take on this sir.

What he said is the simple truth because for any programme to be successful, aside from the fact that it has to be carefully planned, it requires a buy-in by those who are going to implement. The agricultural programme of the last administration had the complete buy-in of all key stakeholders and as chairman of the project implementation team, I took the project as mine and I am proud of it. We drove that project with passion and that passion has not waned in any way rather, it continues to grow. This was made possible because of the buy-in we all had. Now this is one area the leadership qualities of Senator Saraki shines through. Anybody can have an idea but it takes a consummate leader to ensure the buy-in of your lieutenants into your idea so that they will be passionate about it enough to drive it as if it was there own. This is one gift he has in abundance and anybody who has worked with him will tell you that by the time Dr. Bukola Saraki finished marshalling out his plans to you, it will be so clear to you that you will run with the idea without any derailment.

Firstly, I would say that we were lucky to have gotten somebody like that to have agreed to come and run Kwara State in 2003. I would refer to him as the father of modern governance in Kwara State. I say this because prior to his administration, governance was run on a day-by-day bases without any clear-cut long-term plan or template. Dr. Saraki perhaps because of his stellar private sector background knew the place of planning in any successful endeavor. Planning is generally required to make you understand input, design output and create a platform for impact and that was his approach to governance. The resources you require to drive governance are not usually enough and the only way you can get the best result from minimal finances will be optimal allocation of resources and ingenious creativity. This was how Dr. Saraki approached governance. He clearly defined policies that affected each of the critical sectors he wanted to address which covered human capital, economic growth and infrastructure. All the funding that was available were structured to fit into each of these compartments with the understanding of how critical each of those areas to be funded fit into the big picture and enhances a multiplier effect. That was the approach to governance under Dr. Bukola Saraki and that platform has formed a template which we have wholeheartedly adopted with which we are driving governance in this administration. What stood him out was that with limited resources, he transformed a hitherto complete civil service community to a state that is recognized as the pioneer of commercial agriculture in Nigeria and has provided the infrastructure that has enabled a lot of people to come and settle in Kwara State and today, a lot of entrepreneurs have made Kwara their base which of course has translated to a lot more bankable businesses and it goes on. In summary, a lot of the Kwara you see today was pioneered by the last administration and we are doing our utmost best to build upon and improve on the legacy. By and large, I would describe Senator Abubakar Bukola Saraki as a consummate administrator who has succeeded in putting Kwara State on the road map of growth and development through well thought out governance systems which for us, is one of the best thing that has ever happened to Kwara State.

On the 25th of June 2013, Senator Bukola Saraki would be receiving an award from the African Leadership Magazine in addition to the honourary citizenship of the State of Georgia. What goodwill messages do you have for him?

Firstly, we want to thank God for his life and the successes he has been achieving and we are happy that these successes are being recognized within and outside the shores of the country and we believe it is a major motivation to encourage him to continue to do more because he is still very young and imbued with immense capacity to deliver visionary leadership to the good people of this country and we pray that God almighty will continue to spare his life and continue to strengthen him so that a lot more will be seen from him because he is an exceptionally gifted and dynamic individual who is willing and able to deliver service to the good people of Nigeria.