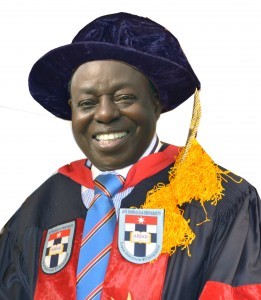 The Educational sector in Africa is one sector that holds the key to the growth and development of the continent. Tough questions have been asked as to the quality of the educational system across the continent and its value in the global world.

In this exclusive interview with African Leadership Magazine’s Kingsley Okeke and Chrys Anyanwu, the famous lawyer, philanthropist, and founder of Afe Babalola University, Emmanuel Afe Babalola throws some light on the educational system in Nigeria and the approaches that can be employed to improve the system. Excerpt:

A lot has been said about your early childhood, how you defiled all odds, subdued discouragements and impossibilities, struggled to acquire formal education and finally rose to prominence. For the benefit of most Africans who share similar childhood and probably may have found excuses in them, can you quickly share some of this experience with us?

Starting up was tough. I ran away from school a number of times but God blessed my family. I eventually became used to school life and came out the best in my class. I started life as a pupil-teacher. Parents who had money sent their children to secondary school but I couldn’t go. I later met a teacher who ordered tuition from Oxford tuition house and so I was placed under the fund. I took the senior exams as a primary candidate of Grammar School Ibadan and fortunately I passed.

Then I prepared for my Advanced level exams again by public tuition. I knew I had the ability, fortunately, when the results were published in the newspapers only three Nigerians made 4 subjects at a sitting and I was one of them. You can imagine because even now to make four subjects at a sitting is not an easy thing. I then applied for a scholarship to study Economics.

Given the criteria, I was entitled to the scholarship automatically but when the results were released I was not given the scholarship in the Western region. I wept because the scholarship was given to someone who was yet to go for A’level in London. I traveled to Ondo State to show the Chairman of the Scholarship Board my certificates and he told me “my boy, God who has helped you come this far will help you go ahead”. Two years after, I passed my BS private study at London University. I was the only one who had a clear cut pass.

The following year, I was the only candidate who sat for BS Economics Honours in Lagos Center. That was how I became a graduate. The white men who headed the civil service were impressed and wanted to promote me but I refused and instead went back to teach. Within one year I got my intermediate degree in law. I then had to go to England for 18months for my second part.

There were many opportunities in reputable companies but I felt I needed to work for myself. It was quite rough but within two to three years, I started handling big cases. In 1967, I was a lawyer for one of the 16ministers charged for stealing N10million and only my client was discharged and acquitted. That was the beginning of my public acceptance and I had about four juniors in my chambers. Big clients like Julius Berger, Shell, Mobil and so on, started coming my way and then I sat back and decided that I should thank God by investing in education. I was offered ministerial appointments four times but I rejected it until I was made Pro-chancellor of the University of Lagos. I accepted it because it had to do with education.

Leadership has been one of the major challenges to Africa’s growth and development; as one who provides leadership and mentorship to leaders in the continent, especially in the judiciary, with about 1500 lawyers 15 of which are Senior Advocates of Nigeria; what would you say is responsible for the quality of leaders we breed in the continent?

I believe that Africa isn’t doing well because of our leaders. A leader is important and must have character and must be a determined person. A leader must be ready to step on toes. As much as possible, he must be selfless.

It is true that every leader in Africa wants to first and foremost acquire wealth for himself at the detriment of the masses. I do not know how many Nigerians will turn down ministerial positions as I did but we find people spending their money and selling properties to ensure that they become Ministers and contest elections. The quest for personal wealth is largely responsible for bad leadership however leadership cannot be isolated from followership.

The judiciary has come under heavy criticism in the country, with some calling for a review of Nigeria’s judicial systems; as a renowned jurist; what is your view on the goings-on in the Judiciary?

The main challenge affecting the judicial system is the “Nigeria factor”. First, the salary paid the judges is a huge challenge because they do not earn up to one-tenth of what politicians earn yet they are the ones to judge election issues. As the President of the Institution of Arbitration in Nigeria, I have seen this over and over again. Politicians bribe judges who handle election cases. Of course, if a judge is well paid he can send his children to good schools just like politicians do but as it stands the judges cannot do that. So, the salaries of judges should be reviewed. I have also suggested that election cases should be taken to the arbitration courts instead of the high court. Before now, judges were appointed but now lawyers apply to be a judge which is not done anywhere. When I was 10yrs in the bar, I was invited to become a judge but I refused because I knew I wasn’t ready. I wanted to acquire enough property to take care of my children so that I wouldn’t have to take a bribe. Politicians have also made in-road into the appointment of judges. There are still upright ones though but they suffer when it comes to finances.

Afe Babalola University has been adjoined to be one of the fastest-growing universities in sub-Saharan Africa. What do you do differently in this university to earn you this impressive record?

The University started in January 2010 with only 242 students. We are already 6,000 in 6years. It is remarkable. We rank 2nd out of 68 Universities in Nigeria and the fastest growing in Africa. We do a lot of research and encourage innovation. In fact, we intend to have an industrial research center soon and collaborate with industries so as to create room for invention which is key to growth and development. Every year, our students bring up inventions which compete favourably with those from other parts of the. We have a hundred percent accreditation in all our 46 programmes. We have also started the construction of a modern hospital and we intend to bring in all necessary diagnostic equipment so as to reduce the drift of going abroad for medical treatment.

Your submission for induction into the African Leadership Hall of Fame received an overwhelming yes. How does this honor come to you?

I was elated because it touched on the youngest of my achievements, the University. It means there are people beyond the shores of this country who are following the little things I am doing to transform education in this part of the world. I love the very words used: “Pioneering excellence and innovation in tertiary institutions in Africa”. That was the main reason I started University. In fact, I spent three months drafting the schools’ anthem which spells out all that the University is all about; one must be hardworking, industrious, have integrity and character.

It was exactly a year and 14days ago that I was honoured by the London University as alumni in three areas. I am the third African to receive such an honour following Desmond Tutu and Nelson Mandela and I am the first in the law professions. I am very happy indeed and it encourages me to work harder. My goal is that within the next two years, we will be the number one best University in Nigeria. In 5years, we hope to be one of the first five hundred in the world, and in 10years one of the first 100 Universities in the world.

Let’s come to the academia. You’re a product of public university and presently the chancellor of a private university. Can you quickly share your experience in both sectors?

I am a product of a missionary school. Those schools were good schools that taught morals and character. The best Universities in the world are private Universities. The future of this country lies with the private Universities which are licensed as a charity like mine and not for money-making. It focuses on character and learning. Learning without character is not learning and a certificate without character is no certificate. Public schools these days do not do things properly. You find teachers skipping classes and dressing inappropriately but in private schools, we ensure that things are done properly. Students should be prepared properly for the future. The earlier missionary schools are returned to their owners the better. Also, the earlier morals are inculcated the better for the country because those coming from the secondary schools must have character and respect.

We saw your farm. Why Agriculture? You seem to be going back to the roots.

I grew up on the farm. I love farming. I always make sure that I have a small farm at the back of my house even when I was abroad. I found that growing plants brings you close to God and nature. When seeds are put in the soil you want to see it develop. A farmer has faith in what he is doing. Faith is the most important thing in life and to me, faith is life. When you plant what you eat it gives you pleasure. I never buy vegetables from the market I eat them fresh from the farm. Agriculture is the main steam of my economy. Those who believe in agriculture can never complain of the inadequacy of food. The western region was once the richest of the regions because of farming. Nigeria was at a time economically better than England because of agriculture. We should be exporting food. We are a consumer country because of the kind of leaders we have.

If we had not relied so much on oil we would have made better use of our money and be better developed. So, I decided that my University must teach agriculture. In the first year, while other courses were oversubscribed, agriculture had no student. In the second year, there were only two students. I then commenced commercial agriculture to entice students. We even reduced the tuition in Agriculture by 50% and promised to give start-ups to graduates from that discipline to encourage them. Now we are growing.

Politics is one of our greatest challenges in Nigeria and we have to do something to make it less attractive. I also think that the drop in oil is a blessing. It will make us understand that we have been leaving fake lives. Very soon we will buckle up. We do not need a party system but a government that is willing to help the people.