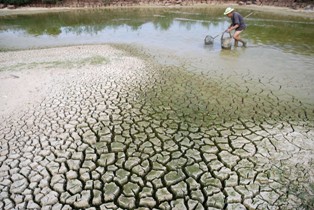 New initiative has been launched to help millions of farmers currently tackling the impacts of climate change. With 90 per cent of the African population involved in agriculture for their livelihood and 65 per cent of the workforce employed in the sector, sustainability is fundamental.

But climate change is making what has always been challenging farming, even more difficult across East and Southern Africa. It’s predicted the severity of extreme weather events will only worsen with time and pose an additional threat to farmers’ already vulnerable livelihoods.

Prosper Aloyce Mtui, from Morogoro town, does two types of farming; food crops and cash crops. The 39-year-old said the situation on his farm this year has left him with almost no produce.

He added: “The planting of maize and sunflower crops has caused us lots of problems. Some of the maize plants have grown and some have withered. We planted some maize during February rainy season.

The rains lasted only for one month and then ended. Some maize grew but at the middle of March the sun was too hot and some plants died of drought. We uprooted them and planted them again, but in April the rain was too great.

The farm was flooded with water and plants were destroyed. This time around we don’t expect to get any produce.” Vuna is working to help smallholder farmers like Prosper combat climate change and become resilient to its impacts.

The programme, being implemented by a consortium of partners led by Adam Smith International, was officially launched at the Serena Hotel in Dar es Salaam, Tanzania on Tuesday, May 24th.

The programme will research what works in Climate Smart Agriculture (CSA) and how farmers can implement new approaches which can help them become more “climate resilient”.

Vuna will look beyond farming practices and assist with input and product market players, to improve the health of the agricultural sector as a whole.

Funded by the United Kingdom’s Department for International Development (DFID) Vuna will work in partnership with governments and stakeholders across the East and Southern Africa to improve the adaptation of agriculture to climate change.

Vuna will work to improve the enabling environment for CSA in East and Southern Africa, linking farmers, businesses and government, to strengthen the sector’s viability.

The adoption of CSA has the potential to improve the lives of smallholder farmers, as well as to allow them to become valuable customers and suppliers to private companies.

The programme will also work to change the behaviour of multiple actors across farming systems, enabling them to better respond to climate risks. Guest of honour at the launch, Raymond Mbilinyi, Executive Director of the Tanzania National Business Council (TNBC), addressed the audience, on behalf of the Minister of State in the Prime Minister’s Office, Hon Jenista Mhagama (MP).

He said: “Our efforts cannot be put at a national level; we need a regional effort to address recurring drought and other climate impacts affecting our agricultural sectors.

I believe the programme will add traction to existing CSA programmes, as well as the climate resilience plan of the Government of Tanzania through its strategic programme for agriculture development.”

The Acting Executive Director for the Tanzania Chamber of Commerce, Industry and Agriculture (TCCIA), Magdalene Mkocha, added: “The ball is in our court. It is up to us to grab the opportunities that have been highlighted and ensure this programme benefits our country and people at large.”

With the right implementation and collaboration, this programme will be a marker for changing the face of agriculture across Sub-Saharan Africa. Vuna will implement projects initially in Malawi, Mozambique, Tanzania, Zambia and Zimbabwe.