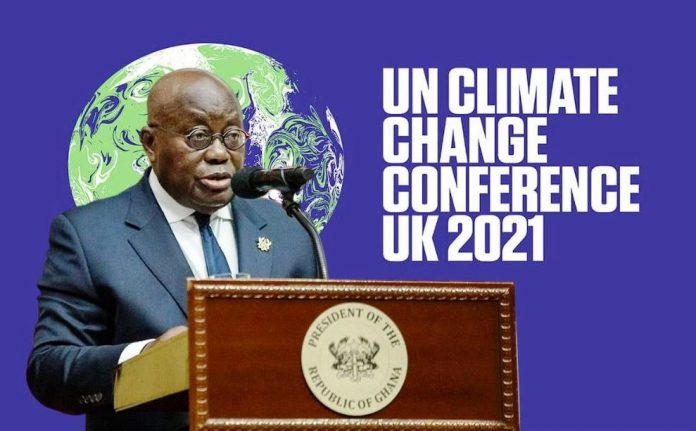 At the COP26 climate summit in Glasgow, Scotland, African Nations have criticized rich countries for failing to meet their promise of giving billions of dollars to help them cope with climate change.

The world’s wealthiest nations — the G-20 — account for 80% of greenhouse gas emissions. However, scientists say poorer countries, particularly in Africa, are suffering the worst effects of climate change.

Rich nations pledged in 2009 to give developing countries $100 billion a year to help them deal with climate change, but the target date was pushed back to 2023 at the beginning of the COP26 summit.

“Those same nations are, however, insisting that we abandon the opportunity for rapid development of our economies. That would be equivalent to enshrining in the global community inequality of the highest order,” Akufo-Addo told delegates.

“Frankly speaking, there is no dignity to a slow and painful death,” he said. “You might as well bomb our islands instead of making us suffer, only to witness our slow and fateful demise. Leaders of the G-20, we are drowning, and our only hope is the life ring you are holding.”

Also speaking at the Conference, Malawi President Lazarus Chakwera further urged rich and powerful nations to meet their financial commitments to least developed countries, including honouring a U.S.$1 billion pledge to developing nations: “When the nations we lead ask, ‘what exactly is the point of this conference?’ what they are really asking is this: ‘What is the point of having you go to COP on our behalf?'”

The Malawian president referenced recent climate disasters to ensure his fellow leaders knew of the reality those in developing countries face from climate change.

Their appeals failed to shift the timetable. But the frustration was tempered by progress on other vital climate emergencies.

More than 100 world leaders agreed to end deforestation by 2030, backed by close to $20 billion in public and private funding. They include Brazil’s president, who is not attending the summit. He addressed delegates by video link.

“We are committed to eliminating illegal deforestation by 2030. I call on every country to help defend all forests, including with adequate resources for the benefit for all,” he said.

Deforestation has increased in the Amazon under Bolsonaro to its highest level in a decade. Chief Ninawa, a Brazilian Indigenous leader attending the COP26 summit, was sceptical of Bolsonaro’s pledge.

“It won’t solve the social problems in our communities, where there is no water, where there is deforestation, where there is river contamination. These are investments that will only give free rein to companies to keep their polluting,” Ninawa told Reuters.

“It’s incredibly important progress in addressing the climate crisis because we can now think about methane emissions separately from CO2. And recognizing that reduction of methane represents an enormous lever for making progress in reducing the rate of warming,” Hamburg told VOA at the summit.

China and Russia — two of the world’s biggest methane emitters — did not sign the methane pledge.

The absence of the Chinese, Russian and Brazilian presidents has led to questions about how effective the summit will be in curbing global warming. The host, British Prime Minister Boris Johnson, said Tuesday he was “cautiously optimistic.”

While there may be no big breakthrough on reducing overall emissions at COP26, organizers say the smaller, targeted agreements on protecting rainforests, cutting methane and helping vulnerable island states add up to significant progress in tackling climate change.

World leaders have returned home. Their teams of negotiators will now decide the summit’s fate — and, many scientists say, the future of planet Earth.