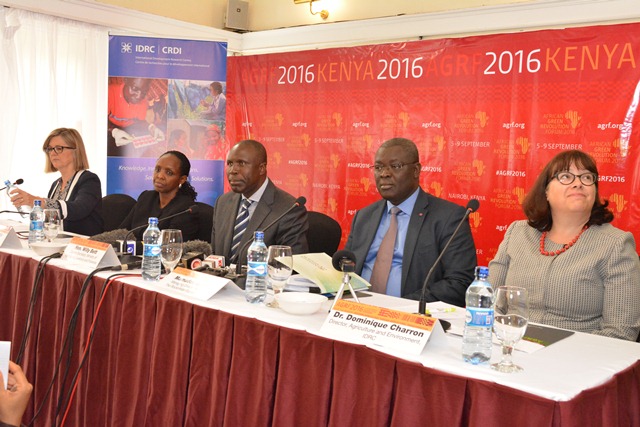 Heads of state and high-level officials from over 40 countries are among 1500 agriculture experts gathering in Nairobi for a five days  Sixth African Green Revolution Forum, with the promise to deliver hundreds of millions of dollars in new investments for African farmers and agriculture businesses.

“There is unprecedented agreement here in Kenya and across Africa that big investments in agriculture are the key to food security and strong economic growth,” said Kenya president Uhuru Kenyatta who is hosting the Forum.

“Seize the Moment” is also the name of an ambitious Africa-wide agriculture campaign launched by the African Union Commission, the New Partnership for Africa’s Development (NEPAD), the African Development Bank (AfDB) and key NGOs and donor countries.

There are anticipations that it will be backed by hundreds of millions of dollars in new investments from African governments, development partners, the private sector and financial institutions.

The “Seize the Moment” campaign is expected to bring a world-wide call to action from the United States Agency for International Development (USAID), energized by President Obama’s Global Food Security initiative—the largest development commitment from the administration and one that is aligned closely with the African Union’s agriculture agenda.

Additional, both the Rockefeller Foundation and the Bill & Melinda Gates Foundation are expected to endorse the campaign and continue their strong backing of efforts to boost production and income for smallholder farmers and local agriculture businesses.

Ten years ago, funding from the two organizations launched the Nairobi-based Alliance for a Green Revolution in Africa (AGRA).

Today, they continue to work closely with AGRA, which has developed an extensive network of partners in the public and private sector across 18 countries.

In addition, the Kenya Commercial Bank (KCB) will outline efforts to give agriculture a higher profile in its loan portfolio and seek a similar commitment from other leading financial institutions.

“While much has been accomplished over the last decade, we need to work far more aggressively to tap the potential of agriculture to be a powerful engine of economic growth across Africa,” said Mr. Strive Masiyiwa, Founder and Executive Chairman of Econet Wireless who also chairs AGRA’s Board.

“Just as we have seen in Africa’s telecom revolution, I believe the private sector can become a force for social change by transforming African agriculture,” he added.

“Business-focused investments in production, processing and marketing can ensure that the soaring demand for food products among Africa’s urban consumers delivers new economic opportunities for rural communities and African youth.”

The meeting will be the release of a landmark annual African Agriculture Status Report (AASR). Subtitled “Progress towards an Agriculture Transformation in Sub-Saharan Africa,” AASR 2016 offers a detailed analysis of a decade-long agriculture expansion effort that has been the most successful development initiative in African history.

The report also offers a frank assessment of the challenges that lie ahead and recommends strategies for overcoming them.

Another groundbreaking moment at the AGRF will be the inaugural award of the newly-created Africa Food Prize.

The accolade calls attention to individuals and institutions that are inspiring and driving agricultural innovation throughout Africa. The Africa Food Prize Committee is chaired by Former Nigerian President Olusegun Obasanjo.

This year’s AGRF will feature many other heroes of African agriculture who are committed to mobilizing the investments and partnerships that can “seize the moment” for making Africa’s agriculture potential a reality.

“We believe Kenya is the appropriate venue for this historic gathering because farming and food production are the lifeblood of the Kenyan economy and we want to set an example that others can follow,” said Kenya’s Agriculture Cabinet Secretary Hon. Willy Bett.

“We are committed to pushing through the policy and financial reforms that can make farming and other agriculture businesses an economically and environmentally sustainable way of life.”

The AGRF is a platform for global and African leaders to develop actionable plans that will move African agriculture forward.

Established in 2010, the Forum has emerged as Africa’s leading “platform of agriculture platforms” that brings together a range of critical stakeholders in the African agriculture landscape including African heads of state, ministers, farmers, private agribusiness firms, financial institutions, NGOs, civil society, scientists, as well as international “development and technical partners” of Africa to discuss and develop concrete plans for achieving the green revolution in Africa.