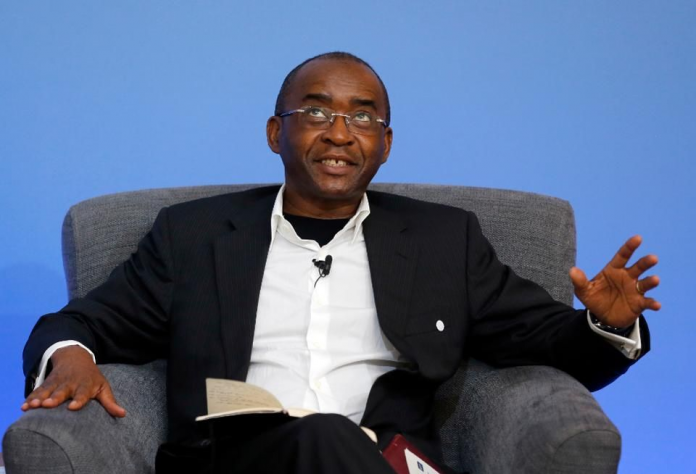 As our African of the week, we are profiling Zimbabwean billionaire businessman, and philanthropist, Strive Masiyiwa.

Masiyiwa is the Founder and Executive Chairman of the telecommunications, technology and renewable energy company Econet Global. He was recently appointed African Union Special Envoy to mobilize the private sector response to Covid-19. The businessman has won numerous accolades and gained international recognition for his business expertise and philanthropy, and is considered one of Africa’s most generous humanitarians.

Masiyiwa also funds initiatives in public health and agriculture across the African continent.

This week, the billionaire businessman has, through his ‘Re-Imagine Rural’ initiative, completed a 100KW solar power project at Ndolwane in Bulilima. A district in Matabeleland province of Zimbabwe.

The Reimagine Rural Initiative has been active for a few years, with a mandate to promote entrepreneurs with solutions to improve rural Africa. In February 2019, Masiyiwa and his wife Titsi pledged $100 million to fund rural entrepreneurs for ReImagine Rural Initiative in Zimbabwe. Following through on the project is the recently completed 100KW solar plant which will support 70 businesses in Ndolwane, Bulilima district.

While breaking the news on his Facebook blog, Masiyiwa stated that Ndolwane was chosen as the first site of the ‘Re-Imagine Rural Ugesi Minigrids’. According to him, “some are using the power to irrigate market gardens to sell vegetables, while others are planning to do a major poultry business using its power. We are expanding its power line grid to eventually reach a 10km radius”.

He further stated: “We have just bought our own water drilling rig, and as soon as it arrives, we plan to drill deep well boreholes in places like Ndolwane, where it is dry. It will help communities with market gardening and water for their cattle.”

Ugesi Minigrids currently has ten other sites under construction around the country. The organization aims to transform rural communities with cost-effective, reliable solar power.

He noted this as his vision of how rural Africa can be Re-Imagined. His vision has drawn a lot of interest outside Zimbabwe. “Several global philanthropists have asked for presentations on how this model can be used in other African countries. This excites me,” said Masiyiwa.

“Even with the pandemic, we are still Re-Imagining. It might slow us down, but it will never stop us.” He added.

Masiyiwa has also been at the forefront of fights against the impact of the pandemic in Zimbabwe. He has so far donated 45 ventilators, 100,000 COVID-19 test kits and pledged to pay striking doctors and nurses in the country to compel them to return to work.

Recently, in his capacity as the African Union Special Envoy to mobilize the private sector response to Covid-19, he is leading a private partnership to start local manufacturing of Covid-19 equipment. He is working with fellow philanthropists such as Sir Richard Branson, British business magnate, and founder of the Virgin Group, and Canadian billionaire internet entrepreneur, Jeff Skoll. The group has identified two pieces of equipment which will be manufactured in South Africa.