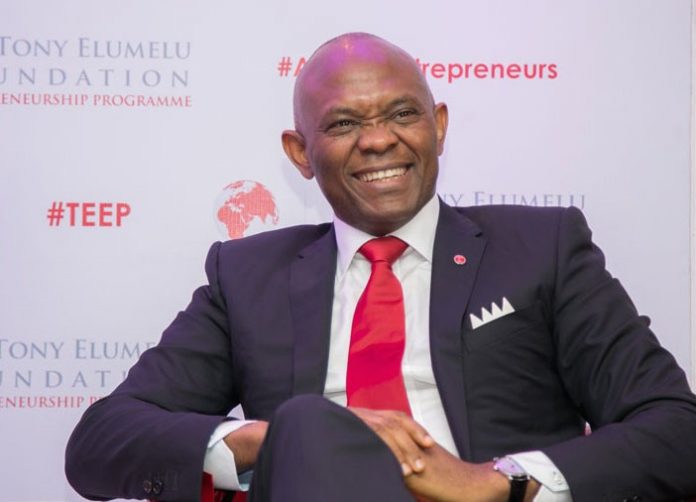 Elumelu is the Chairman of Heirs Holdings, United Bank for Africa, Transcorp, and founder of the Tony Elumelu Foundation. He is known for his Africapitalist business models and philanthropy.

A seasoned economist with a long-standing history in the Nigerian banking industry, Elumelu, during his early career in 2005, acquired Nigeria’s Standard Trust Bank, and afterwards, the United Bank for Africa (UBA), completing one of the biggest mergers in the history of Nigeria’s capital markets. He retired as Group Managing Director and CEO of UBA in 2010 following the introduction of ten-year tenure limits for bank CEOs by the Central Bank of Nigeria’s (CBN).

Upon retirement, Elumelu founded Heirs Holdings, which invests in the financial services, energy, real estate and hospitality, agribusiness, and healthcare sectors. In the same year, he established the Tony Elumelu Foundation, an Africa-based and African-funded philanthropic organization. And in 2011, Heirs Holdings acquired a controlling interest in the Transnational Corporation of Nigeria Plc (Transcorp), a publicly quoted conglomerate with business interests in the agribusiness, energy, and hospitality sectors. Elumelu was subsequently appointed chairman of the corporation.

Since the establishment of Heirs Holdings, Elumelu has, through these channels, empowered Africa’s youth, startup businesses, SMEs, and business systems. Some empowerment channels adopted by Heirs Holding include investing into Africa’s future through the Tony Elumelu Entrepreneurship Programme (TEEP), which has one hundred-million-dollar commitment to identify, fund and train ten thousand African entrepreneurs over ten years. Within the first five years, the TEEP impacted over 7,500 beneficiaries and supported a network of over 400,000 entrepreneurs who applied to the programme.

Elumelu is also an advocate for gender diversity and women inclusion, which is evident in the high representation of women in the board and management of his organizations.

The Foundation’s long-term investment in empowering African entrepreneurs is emblematic of Tony Elumelu’s philosophy of Africapitalism, which position’s Africa’s private sector, and most importantly, entrepreneurs, as the catalyst for the social and economic development of the continent.

In March 2020, Tony Elumelu, through the UBA Foundation announced a donation of over five billion Naira (USD14 million), to catalyze a comprehensive Pan-African response to the fight against the coronavirus (COVID-19) global pandemic.

The coronavirus pandemic has not stalled his drive to see Africa’s economies take charge, as he continues to guide African startups, and SME’s. During the lockdown initiated in most African countries to curb the spread of the coronavirus pandemic, the Tony Elumelu Foundation in partnership with Project Management Institute rolled out a 6-Part Masterclass centred on Project Management for SMEs, learning and ideas for startup entrepreneurs.

Elumelu is the originator of the term Africapitalism. He defines Africapitalism as an economic philosophy that embodies the private sector’s commitment to the economic transformation of Africa through long-term investments that create both economic prosperity and social wealth. He sees Africans taking charge of the value-adding sectors, and ensuring that those value-added processes happen in Africa. Not through nationalization or government policies, but because there is a generation of private sector entrepreneurs who have the vision, the tools and the opportunity to shape the destiny of the continent.

Tony Elumelu insists that Africapitalism is not capitalism with an African twist, but a rallying cry for empowering the private sector to drive Africa’s economic and social growth. And he has walked the talk every step of the way.