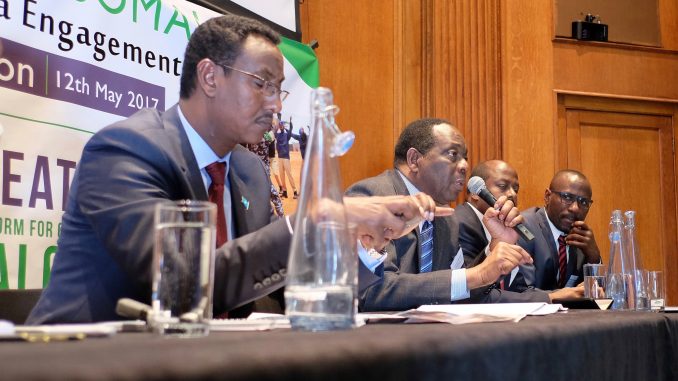 The Somali community living in London held a highly constructive dialogue with the AU Special Representative for Somalia Ambassador Francisco Caetano Madeira, recently, on the progress made in the security front in Somalia and the role of the AU Mission in the Horn of Africa.

The dialogue, attended by the Minister of Defense in the Federal Government of Somalia Hon. Abdirashid Abdullahi, also discussed ways in which Somalis in the diaspora can enlist their support.

“As leaders in the London Somali diaspora, your ability to mobilize, motivate and accurately inform your compatriots will ensure that your collective sacrifices serve to benefit the nation of Somalia,” Amb. Madeira told a well-attended forum in Central London, on Friday evening.

“Your specialized skills and experience are needed to uplift Somalia. Pledge your commitment, however small, to make a difference,” he said.

The meeting was held a day after the hugely successful London Conference on Somalia, where global leaders pledged increased support to Somalia National Army, ahead of an envisaged drawdown of AU troops from the country.

“We can only rebuild our army if we get funds. We are discussing a programme that we will share with you, that will require every working Somali to make a contribution to,” Minister Abdullahi told the gathering.

“We need to do more as we recover and we need to sacrifice a lot with our time and knowledge,” he stated.

The state of the Somali National Security Institutions was a concern at the just concluded London Conference. There was a unanimous agreement that radical measures be taken to strengthen the national army, to empower Somalis to take control of their own security.

“I am very positive that we will succeed. The London Conference just clearly indicated that we are now in a position to take this process to another level,” Amb. Madeira said.

The meeting with Somalis living in London familiarized them with the positive developments taking place in the country, as a result of the country’s return to relative peace.

“What we need is the international community to support – the British Government or the European Union or United Nations – to build the Somali forces to battle against Al-Shabaab and to defeat them,” a participant at the dialogue said.

Sayid Ali, a community worker in London added, “I think Somalia is a very rich country and everybody knows that. I think everything will improve and hopefully peace and security in Somalia will be in the interests of the whole world and of the African continent.”

“I hope our African brothers and sisters will continue to assist us in achieving a sustainable long term peaceful solution.”