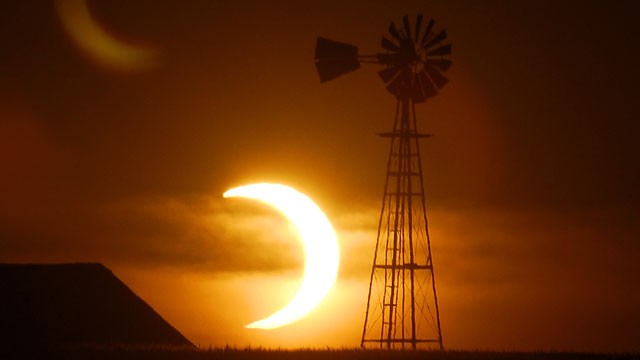 Africans were treated Sunday to a spectacular solar eclipse that swept across the continent, while in the United States and Europe sky-gazers also glimpsed the rare phenomenon.

A total eclipse could be seen over parts of Africa and one of the best views was in northern Kenya’s Sibiloi national park, where a few hundred tourists gathered on the edge of the desert lake Turkana.

Alongside the tourists were colourfully dressed Kenyans from the Turkana, Rendile and Dasanach tribes, many draped in beads, who cheered as the sky darkened.

But dramatic weather almost spoilt the show, with sandstorms, rain, a rainbow and heavy cloud all minutes before the eclipse, an AFP photographer said.

Some tourists, fearing they would miss the sight, jetted off at the last minute, seeking a clearer spot on other side of lake.

In the end the eclipse, which lasted about 10 seconds in Kenya, was partially obscured by cloud.

Sky-gazers in Gabon, Congo, Uganda and Ethiopia were also treated to the total eclipse.

“But unfortunately the bad weather spoiled the party a bit.”

The West African nation got peak viewing of the total eclipse as it swept over a path nearly 60 kilometres (37 miles) wide.

In Port-Gentil, families gathered together for the occasion along the sea front, facing the sun.

Like many in the town, Diledou used special glasses distributed by authorities to watch the rare event.

Those who did not have any came up with imaginative solutions, among them Pauline Koumba, who put a bowl of water in her courtyard and watched the reflected eclipse.

“I saw the brief passage of the eclipse in my bowl. But it was over quickly and the black clouds spoiled the effect,” she said.

Families also gathered in Gabon’s capital Libreville, where the eclipse was less spectacular, but where the skies darkened noticeably for about half an hour from 1330 GMT.

The round shape of the Earth explains why viewers in Africa saw a total eclipse, while those in the United States and Europe only saw the sun partly obscured.

Local myths there attribute the event to the Moon eating the Sun.
Men and women from the Turkana tribe take part in a ceremony in the Sibiloi national Park in the Turkana region  Men and women from the Turkana tribe in Kenya took part in a ceremony ahead of the eclipsemPartial views were available in eastern North America and southern Europe.
This solar eclipse was a rare occurrence in that it was “hybrid” switching between an annular and total eclipse.
In a total eclipse, the Moon completely covers the sun, while an annular eclipse occurs when the Moon is at its farthest from the Earth and does not block out the Sun completely, leaving a halo of sunlight still visible around the Moon.
Looking directly at the sun during a partial or annular eclipse, or the partial phases of a total solar eclipse, can can cause temporary or permanent damage to the retina
Special welder’s glasses or mylar lenses manufactured especially for viewing solar eclipses are recommended or you can make a pinhole camera by making a 3mm hole in a sheet of paper, turning your back to the Sun and using the pierced page to project the image of the Sun on to another sheet of paper.

The eclipse, which occurred at exactly 1:03pm, local time, could only be seen through binoculars or a telescope by projecting the sun’s disc onto a sheet of card or paper.