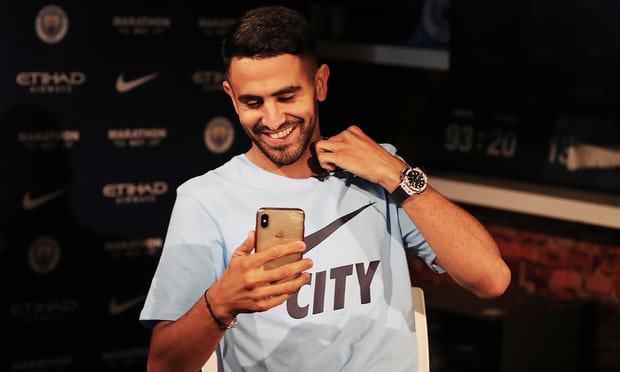 Riyad Mahrez, an Algerian international winger, has officially joined Manchester City from Leicester City on a five-year deal. Manchester City has confirmed the signing of the Desert Foxes winger on a record transfer fee of £60m.

27-year-old Riyad has joined the Citizens for a fee around £60m which could rise to £75m, becoming Pep Guardiola’s first major summer signing.

“I am so pleased to have joined City, a side playing great football under Pep Guardiola. Watching them from afar has been a pleasure. Pep is committed to playing attacking football, which is perfect for me, and City’s performances last season were outstanding. They’re redefining the English game and I wanted to be a part of it. I think we can be successful over the coming years and I believe my own game can develop under Pep’s management,” Mahrez said.

During his time with Leicester City, Riyad Mahrez featured in about 170 appearances, assisted 38 times and scored 48 goals as he guided them to a historic EPL title two seasons ago. He helped Leicester win a promotion to the Premier League in 2014 and also guided them to the quarter-finals of the UEFA Champions League.

Mahrez was the 2016 CAF African Player of the Year. He has been capped by his country on 39 occasions after making his debut in 2014.