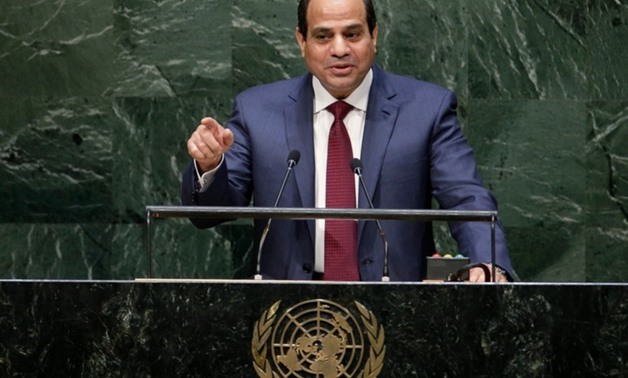 Egyptian President Abdel-Fattah el-Sissi told world leaders on Tuesday that the parameters that would ultimately shape the resolution to the Israeli-Palestinian conflict are well known.

Speaking at 73rd Session of the U.N. General Assembly, el-Sissi said, “There is no time to waste on such a debate. What is required is the political will to resume negotiations and achieve a settlement in accordance with these determinants.”

He said that the failure of the United Nations to resolve this conflict was undermining its own vision.

“We cannot talk about the peaceful settlement of disputes as a founding principle of the United Nations and an indicator of its credibility, without citing the Palestinian cause. It stands as a perfect example of the failure of the international system to find a just solution to the conflict, based on international legitimacy and United Nations resolutions, that guarantees the establishment of a Palestinian state with east Jerusalem as its capital,” he said.

El-Sissi is scheduled to meet with Israeli Prime Minister Benjamin Netanyahu on Wednesday.

El-Sissi also indirectly attacked Iran over its efforts to use the civil wars in Yemen and Syria to bolster its regional influence.

“There can be no way out of the crisis in Syria and the plight of Yemen, except by restoring the nation-state, preserving its sovereignty and state institutions, as well as realizing the legitimate aspirations of its people. Egypt fully supports a U.N.-led political solution in these two countries, and rejects any exploitation of these crises to create footholds for regional interventions, or enable an environment for terrorism, extremism and sectarianism,” he said.

“There is no such thing as a unilateral agreement; it takes at least two parties to make an agreement. Helping the parties achieve that agreement, and work together to build a new future, deserves the strong, steady support of all our world,” the monarch said.

He indirectly criticized the U.S.’s decision to recognize Jerusalem as Israel’s capital and warned that such moves endanger the city’s special status.

“Above all, we need to safeguard the heritage and peace of Jerusalem, a holy city to billions of people around the world. The Hashemite Custodianship of Islamic and Christian holy sites in Jerusalem is a duty that Jordan is proud to carry and we will counter any attempts to change the holy city’s historic Arab Christian and Muslim identity,” he said.

The king noted that guaranteeing the Palestinians’ right for dignity according to U.N. resolutions was “the heart of the two-state settlement” and “the only path to a comprehensive, lasting peace.”

The “U.S. has long been committed to peace and has a leading role in our progress going forward,” he added, stressing that any action that goes against the notion of a two-state solution is doomed to fail.

“And what could possibly be the future of what some propose: a single, binational state, whose very foundation is a rejection of the equality of its own people? That’s the ugly, undemocratic reality of the one-state idea. It is by no means an alternative to a two-state peace settlement, it is an abandonment of peace, a new way to go AWOL from the work of reconciliation, and the opposite of what both sides need, and have sought for so long.”

King Abdullah also warned that “there is no such thing as a unilateral agreement; it takes at least two parties to make an agreement.”

“What can resolve the crisis between Israel and Palestine? Not unilateral initiatives, nor trampling on the legitimate rights of the Palestinian people to legitimate peace, nor underestimating Israel’s fair right to security. … There is no credible alternative to the two-state solution, living side by side in peace and security with Jerusalem as capital,” he told world leaders.

Macron said Paris had unwavering friendship toward Israel, but called on Israel to end policies that undermined the possibility of a peace agreement.

“Continuing this path would be a mistake,” he said.