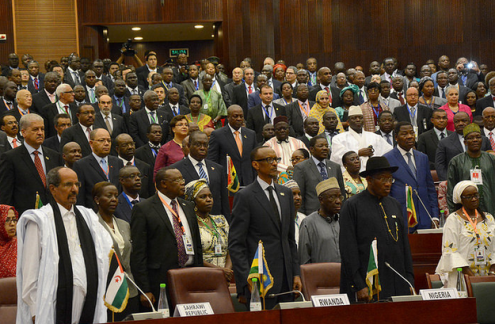 The decision by the Assembly of the African Union (AU) to grant sitting African leaders immunity from prosecution for genocide, war crimes and crimes against humanity is a backward step in the fight against impunity and a betrayal of victims of serious violations of human rights, Amnesty International said.

An official communiqué released yesterday confirmed that African heads of state and government meeting at the AU Summit in Equatorial Guinea on 26 and 27 June had voted to adopt an amendment granting incumbent government leaders and other senior officials immunity from prosecution in the African Court of Justice and Human Rights.

“At a time when the African continent is struggling to ensure that there is accountability for serious human rights violations and abuses, it is impossible to justify this decision which undermines the integrity of the African Court of Justice and Human Rights, even before it becomes operational,” said Netsanet Belay, Amnesty International’s Africa Director for Research and Advocacy.

“We are deeply disappointed that African heads of state and government have failed to provide the leadership needed to ensure justice for victims of crimes under international law, opting instead to shield themselves and future generations and leaders from prosecution for serious abuses.”

Irrespective of the AU’s decision, the International Criminal Court (ICC) will retain the right to investigate serving African heads of state and government for such crimes.

“This decision does not fit with the AU’s own Constitutive Act and the other international human rights obligations and commitments of its member states,” said Netsanet Belay.

“Those responsible for serious human rights violations must face justice, irrespective of their official positions and the adoption of this amendment is a backward step in the long battle for accountability and human rights in Africa.”