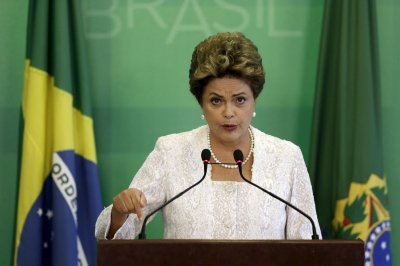 Brazilian President Dilma Rousseff has recently said her vice president was orchestrating a conspiracy to topple her, as efforts to impeach the leftist leader gained momentum in Congress.

Aided by her mentor and predecessor, Luiz Inacio Lula da Silva, Rousseff scrambled to secure enough support from a dwindling array of allies to block impeachment in a lower house vote due on Sunday that analysts project she will lose.

A congressional committee voted on Monday by a larger-than-expected margin to recommend that Rousseff be impeached for breaking budget laws to support her re-election in 2014, a charge Rousseff says was trumped up to remove her from office.

Political risk consultancies estimate at 60 to 65 percent the odds of impeachment clearing the lower house, since the committee vote was expected to sway undecided lawmakers to join the opposition.

While Rousseff fights for her political survival, her government is largely paralyzed as Brazil, the world’s seventh-largest economy, struggles with a deep recession and its biggest-ever corruption scandal.

“They now are conspiring openly, in the light of day, to destabilize a legitimately elected president,” Rousseff said in a speech on Tuesday, referring to an audio message sent by Vice President Michel Temer to his supporters on Monday in which he called for a government of national unity to overcome Brazil’s political crisis.

The congressional committee’s 38-27 decision was backed by Temer’s PMDB party, formerly her main coalition ally. The party’s defection last month greatly increased the likelihood the lower house will send her impeachment to the Senate.

Temer would take over if the Senate agrees to suspend Rousseff and proceed with a trial against her.

The rift between Rousseff and Temer reached breaking point on Monday after the audio message was released, which Temer said was unintentional.

“The conspirators have been unmasked,” Rousseff said in her speech. She did not mention Temer by name but cited the message as evidence of what she called an attempted “coup.”

In an interview broadcast on Globo News late on Tuesday, Temer responded to Rousseff’s remarks saying he was ready to take the presidency. “If destiny takes me to that position… I will be ready.”

Looking relaxed and smiling, the vice president denied he’d been plotting against Rousseff and said he did not plan to resign if the lower house votes against impeachment.

Aides say he has been preparing in case he has to replace her, so that he can restore confidence with a business-friendly agenda aimed at pulling the economy out of a tailspin.

Finance Minister Nelson Barbosa canceled a trip to the International Monetary Fund’s spring meetings in Washington to remain in Brasilia for Sunday’s impeachment vote. In its World Economic Outlook on Tuesday, the IMF said Brazil’s prolonged recession would be a drag on growth in Latin America for the next two years.

Brazil’s benchmark Bovespa stock index soared almost 4 percent on Tuesday as investors warmed to the greater likelihood of a Rousseff impeachment, which they believe will improve the prospects of an economic recovery.

Presidential aides said the government was on a razor’s edge over Sunday’s lower house vote, which will be organized by Rousseff’s political arch-enemy, Speaker Eduardo Cunha.

“We believe we have enough support, but it’s very fluid and we are counting the votes day by day,” an official in Rousseff’s office said, on condition of anonymity.

The aide said Lula, Brazil’s most influential politician despite being the target of a graft probe, was leading talks with small parties that are wavering in their support for Rousseff and had offered them government jobs to secure crucial votes.

Negotiations were not easy because they were also talking to Temer’s camp, the aide said.

Rousseff suffered a further blow later on Tuesday, as the centrist Progressive Party, or PP, left her government, saying it would abandon its ministerial roles. The party had been an important Rousseff ally and with 49 deputies in the lower house could decide which way Sunday’s vote goes.

The party’s leader in the lower house, Aguinaldo Ribeiro, told reporters in Brasilia the majority of his party supported impeachment.

At this point, Temer has more to offer than Rousseff, said Claudio Couto, a political scientist at the Fundação Getúlio Vargas think tank.

“The undecided congressmen must be calculating whether to stay with a very weak government that can barely govern the country or bet on a future Temer government that will have more support,” Couto said.

“They intend to overthrow a president elected by more than 54 million voters,” she said, adding that impeachment was aimed at rolling back social and economic advances for many Brazilians during the 13 years of government by her Workers’ Party.