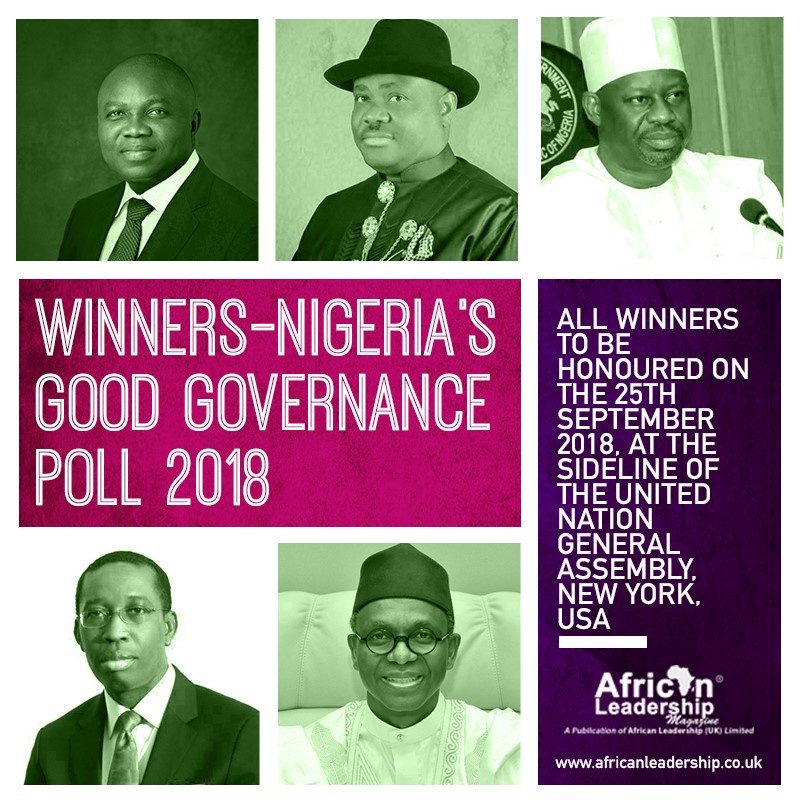 The winners who shall be decorated and presented with the instruments of honour at the International Forum on African Leadership, on the 25th September 2018 at the sidelines of the United Nations General Assembly meeting in New York, were unveiled by the Publisher, Dr Ken Giami in Abuja, Nigeria, after the editorial board concluded the collation of both offline and online votes across all the channels and platforms.  The event with the theme: Peace, Security and Sustainable Development in Africa – Our Home-grown Solutions, has as the keynote speaker, His Excellency, John Magugufuli, President of the Republic of Tanzania.

The Poll which is in its third year is coming on the heels of the successful hosting of two previous editions of the Poll, which has become a veritable tool for measuring performance among Nigeria’s state and regional leaders.

Winners shall be presented with instruments of honour and award in front of over 300 political, business and diplomatic leaders in New York, at the sideline of the United Nations General Assembly Meeting. They will be decorated during the Annual International Summit on African Leadership, billed to hold on the 25th September 2018.

The Good Governance Poll, instituted by African Leadership Magazine UK, is in line with the magazine’s objective of providing credible information and support to leaders in Nigeria and Africa at large. The Poll is part of the group’s strategic engagement tool designed to monitor, performance; gauge the mood of the electorates; promote good governance, as well as engender peer review amongst leaders in Nigeria and Africa at large. The Good Governance Poll, is particularly important in Nigeria, following the country’s prevailing realities. While some Governors and political leaders / public institutions in the country have been unable to meet their obligation to the electorates, others have been ingenious in managing state resources and also making concerted efforts towards positioning their states as a cynosure of development in the country.

Since its maiden edition, African Leadership Magazine has grown to become a leading pan-African flagship leadership-focused publication read by over 1, 000, 000 targeted international investors, business executives, government policy makers and multilateral agencies across Africa, the Middle East and Asia, Europe, and the US. It is distributed at major international and African Leadership events around the world. The magazine has over 850,000 subscribers/Followers on Facebook and a virile readership on other social media platforms. It is a niche and unbiased African voice born out of a desire to ameliorate a lot of Africans by focusing on individuals and corporate bodies that are known for their legacy-based approach to leadership. We believe in building sustainable leadership in Africa through the exchange of ideas in tandem with global best practices. The magazine shall continually seek to herald the dawn of a new Africa as the continent of promise and global leadership, championed by people of integrity and resilience who are rising from the challenges of an unpleasant past; thereby preserving a legacy for future generations of our people.