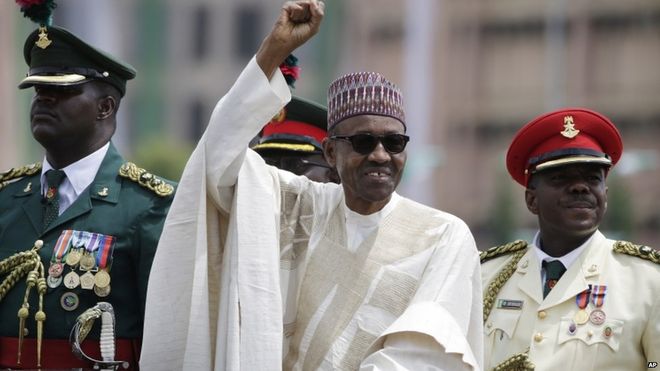 Nigeria’s President Muhammadu Buhari has appointed new defence chiefs after sacking the heads of the army, navy and air force.

The sackings were expected as the president has repeatedly criticised the military’s inability to defeat Islamist group Boko Haram.

The Islamists have recently launched a series of deadly guerrilla attacks, killing more than 250 people.

Both the new head of the army, Maj Gen Tukur Yusuf Buratai, and the National Security Adviser, Maj Gen Babagana Monguno, are from Borno State which is at the heart of the conflict.

The BBC’s Nigeria correspondent Will Ross says the hope is they have a good grasp of what is needed to end the violence.

The new military chiefs will be expected to work closely with neighbours Chad, Cameroon and Niger as they join forces to tackle Boko Haram.

The group has also stepped up attacks on these countries.

At least 12 civilians were killed in Cameroon in a suspected Boko Haram suicide attack on Sunday evening, a military source told the BBC.

Two soldiers also died, along with two bombers who blew themselves up in Fotokol, near the border with Nigeria.

Chad will be the headquarters of an expanded Nigeria-led regional force of around 7,500 troops.

Its formation has gained momentum since President Buhari took office in May.

On Saturday morning, 15 people died in the main market in Chad’s capital, N’Djamena, when a man dressed in a burka blew himself up.

Our correspondent, Will Ross, says just hours before his sacking, army chief Lt Gen Kenneth Minima said the upsurge in violence was the result of military success against the jihadists.

Lt Gen Minima suggested Boko Haram no longer had the capacity to fight the army and so had resorted to attacking soft targets with bomb blasts.

Boko Haram at a glance