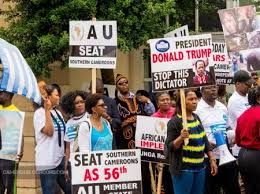 In an effort to meet up with the  demands of gender equality in Africa, political parties in Cameroon have embarked  on a mission committing to achieve a U.N.-established benchmark of at least 30  percent female representations.

Following this ambition, the Government  has declared their decision to the general public as they beckon on all  political parties to put forth an adequate number of female candidates.

Most of the political parties,  including the main opposition SDF and the ruling CPDM, have responded to this  call and have taken public commitments to achieve this national goal. The parties  have also begun to take responsive measures to put forth an adequate number of  female candidates for elected positions in the coming election.

This year, Cameroon will be having  a series of important elections including, local, parliamentary and  presidential. The first election which has been scheduled to hold On the 25th  of March is the senatorial election, therefore to measure up the demands of the  gender goal, women would need to win at least 20 of the 70 senatorial seats up  for grabs, while President Paul Biya would have to include women among the 30  senators that the constitution calls on him to appoint.

According to political observers, the  odds of success are long, at least in the short term.

Cameroon has 386 mayors. Just 26  are women. In the National Assembly, women occupy one-third of the seats in the  lower house, while the upper house is just 20 percent women.

However, based on the details, the  possibilities to achieving this goals may be very slim but female members of  the ruling CPDM party have shown a read attitude to stand irrespective of the  demands and they have also encouraged all women to stand strong.